Welcome, everyone, to the 100th post of Bevboy's Blog!

When I began this blog a couple of months ago, I wondered how I could ever find enough material to fill a more-or-less daily blog. You have learned by reading this blog, of course, that this fear was fully justified. I mean, this really is the most boring blog you have ever seen, right? 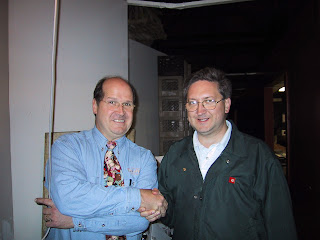 rs. The first one is me (on the right) with Bill Carr, the popular local actor and renaissance man who most recently hosted a Saturday morning radio show on the Rogers talk stations in Nova Scotia and New Brunswick. The show was abruptly canceled this past summer, and more's the pity, as Carr was easily the most improved talk show host I'd heard in a long time. He used to fill in for Andrew Krystal or Tom Young on the same radio stations, often times while also doing an acting gig at Neptune Theatre at night. Boy, was I disappointed when he was no longer on those stations. I seldom listen to News 95.7 now, mostly because I am not overly fond of the content, and also because of the shabby treatment accorded fellow Acadia Grad Bill Carr. This picture was taken at the IWK telethon after party in 2002, I think.

The next picture is pretty neat. You remember Joyce DeWitt, from Three's Company? A few years ago, she was doing a play at Neptune Theatre in Halifax. She was on a local radio station plugging it. During 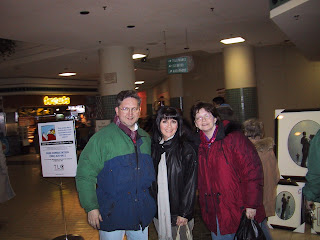 Joyce DeWitt, not being a deaf woman, heard our eloquent remarks, and turned and smiled and acknowledged that she was, indeed, Joyce DeWitt. She looked at me for a moment and said, "Bev! Is that you?" And I said it was, indeed, Bev. It wasn't quite as momentous an occasion as the time, say, Dr. Watson was introduced to Sherlock Holmes; or the guy carrying the peanut butter bumped into the guy carrying the chocolate, but you get the idea.

Anyway, Joyce DeWitt was kind enough to pose for this photo with us (I happened to have my digital camera with me, years before I had a BlackBerry with a built-in camera) and answer a question or two from us. Joyce DeWitt was in a hurry, so she dashed off; but a few minutes later she found us to make sure that the picture had turned out ok! That was pretty classy. Plus, she gave me her phone number and invited me to call her at her big, scary hotel room at 3 in the morning. I said, "What about Patricia?". Joyce DeWitt said, "She can watch!". And I said, "Well, as long as she has something to do, it's ok with me". But that is a story for another time. 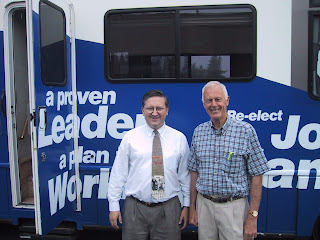 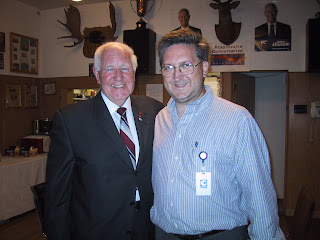 On the left is me in 2003 with former Premier John Buchanan; and on the right, John Hamm is posing with me. Or the other way around. Your pick.

Hamm was running for re-election in 2003 when I learned he would be appearing at the local Tim Hortons. I managed to finagle an opportunity to have my picture taken with him. And john Buchanan was easy to meet as well. He was at a local nomination meeting, and he kindly agreed to pose with me that evening. A very nice man, and a funny one, too.