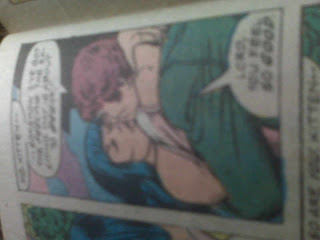 A couple of months ago I wrote about my least favourite favourites. It was a list of faves that had somehow ended up in my favourites list on my computer. Face it: You have some "favourites" on your computer that you wish you didn't, or you wonder how they heck they got there. Don't you lie to me.

(Yes, I know. I run Firefox now. They're called bookmarks now. But the original post was when I was still using IE, and they're called favourites there. )

One of that llst was for my least favourite comic book writer. Don McGregor. I quoted a frame from an issue of a book he wrote long ago and which I read as a child. I giggled even back then when a female character remarked at how good her man felt.

Guess what I found tonight? That very issue!! And, it's just as cheesy now as it was back then. And, now that I have known the company of a woman or 70, the line is even dumber now!


Bev
Via BlackBerry Enterprise Server
Posted by Bevboy at 3:47 PM