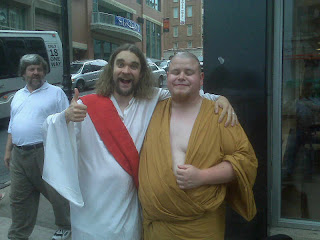 You don't see this in Des Moines!

I was walking to coffee this afternoon when I saw this guy across the street. He was wearing robes and had long hair. 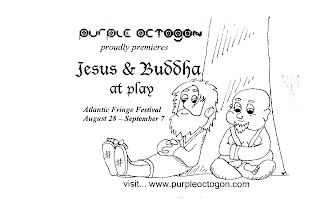 Saw the Buddha guy later. They were kind enough to pose for the above picture.

This is all my way of saying that the Atlantic Fringe Festival started up today in Halifax. It is all about plays and theatrical performances. The above guys are part of Jesus and Buddha at Play at the Khyber Theatre on B 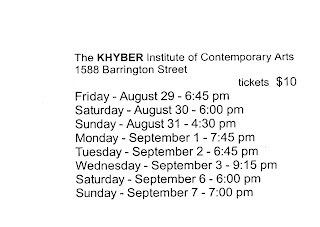 
A number of years ago, Patricia and I attended a fringe performance at a former movie theatre, a place that has since been changed into a Mountain Equipment Co-Op store as well as a satellite office to the Nova Scotia Community College. It was ok. These are at best semi-professional actors and writers and directors. The joy in seeing this stuff is in what might happen on that stage, and seeing these people learn their craft.

I am not saying that the guys who play Jesus and Buddha don't know what they're doing. They were nice to enough to pose for me. Their play is probably great fun and may even have something to say about religion and peaceful co-existence. I just know that when I attend a fringe festival production, not to expect a lot. I am, therefore, rarely disappointed.