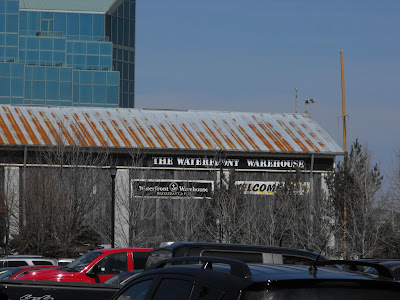 For this special post, number 777, I thought I'd inaugurate an irregular feature here at Bevboy's Blog: Things in Halifax That Just Don't Make Sense, or the TIHTJDMS column. In this feature, I will discuss things that may at first blush appear quaint, historic, funny, whatever. But upon reflection, sober second thought, whatever, it doesn't make any sense.

The first item is in the above picture. I'm not going to comment on the quality of the food at the Waterfront Warehouse. I have eaten there once or twice and never spat anything out, which goes a long way in my book.

Years and years ago, the front of this building, facing Lower Water Street, was a Wacky Wheatley's electronics store. It left the downtown to Kempt Road, before it moved to its present location in Bayer's Lake. Afterward, the building was empty for a spell before the above restaurant moved in.

It looks fine inside, but the outside looks awful. There is rust on the roof, or perhaps faux rust. It is not an inviting place to enter. It looks unfinished. Why should one go into a place, when one's perception is that the roof may collapse?

Every time I walk past this place, as I did today on my lunch hour when I snapped the above, I wonder what the Hell the owners were thinking when they decided to have fake rust on the roof of the place. I keep wondering just what other neat ideas they have up their sleeves for future restaurants. What next? A faux crackhouse? Pretend dead hookers strewn about while you decide on your entree? Needles on the table that are actually breadsticks? Furtive-looking, malnourished waiters and waitresses taking your order?

Next, when I get around to it: An upscale restaurant whose name conjures up an unsavoury aspect of Halifax's history.