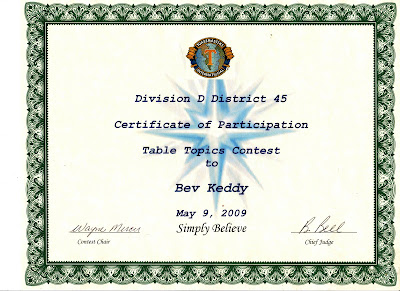 Say hello to my most recent Certificate of Participation in Toastmasters.

There was a mix up, resulting in my arriving at the contest more than an hour early. Kinda sucked.

There were two contests today: International Speech, and Table Topics. I was a participant in TT. I was led into the auditorium and asked a question about what makes a person happy.

I had a couple of seconds to think about how to respond. I remembered a university course I took in 1986; it was an English course in fantasy. I recalled the professor saying that happiness is a by-product of whatever you're doing. I seized that fragment and used it as the basis of my two minute speech.

I talked about how, if you seek happiness, you're doomed never to find it. You'll die miserable and alone, and nobody will attend your funeral. Instead, find things you like to do. Surround yourself with people you enjoy being with. Get a job that you look forward to getting out of bed every morning to go off to.

I was the sixth person to speak, out of eight. I only have an idea what was said by the earlier participants. But several people congratulated me for my performance, and several more expressed disappointment that I did not win, place, or show.

I could only do my best today, and I feel I did. If the judges feel that others did a better job than I did, then I can't do anything about that. I have to accept their decision, and I do.

This is the farthest I have ever progressed in a TM contest. Perhaps next year I'll go to the next level.

Bevboy
Posted by Bevboy at 6:58 PM