After the Charlie A'Court show Friday evening, Patricia and I got a quick dinner at the Keg. From there, we went to one of the local Ghost Wal 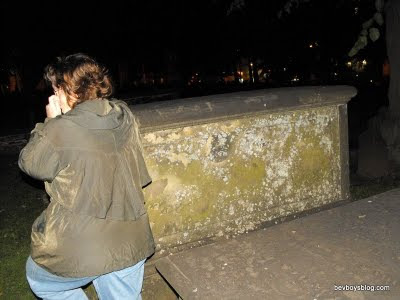 ks that the city has. This one, in my opinion, is the best. It is conducted by Andy Smith, who runs Tattletours. He is an actor; he knows how to present and project himself.

The two hour walk was excellent. We heard some good Halifax ghost stories. We heard some wonderful snippets of Halifax history. We saw some interesting Halifax architecture.

We have eaten at a place called the Five Fishermen. In its storied life, it has been the first building for the Nova Scotia College of Art and Design, a funeral home used to store Titanic victims and the Halifax Explosion, and the restaurant that we currently enjoy. It is reported to be haunted. 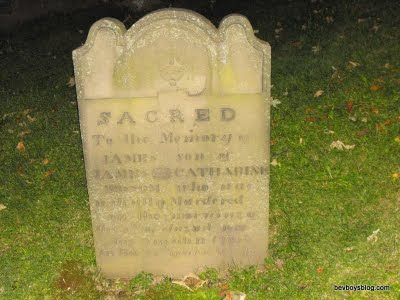 At one point, we entered the old Halifax cemetary. I have lived here for more than 20 years, and this was first time I had been there. We were shown the tombstone of a young man who had been "willfully murdered" by another man who had not been tried for the crime. We saw the tombstone for Alexander Keith's first wife. And we saw the crypt for the man who set fire to the President's mansion in the U.S. during the War of 1812. That's why Americans have a "White House" now. The General in charge of it was named Robert Ross. Read about him here.


It was a wonderful ev ening. And it wasn't over after the walk was over. We still spent some money at the Casino. 20 d0llars disappeared like that. Then, it was home for a many hour sleep.

Bevboy
Posted by Bevboy at 2:44 AM

Bev, Five Fishermen they have a good webpage too