to a couple of mailing lists about silent films. Yesterday, I saw a post that nearly made me spit out my roast turkey sandwich. I'll quote it below. I'll pick up my comment afterward.


Sunday, November 22 at 2pm Slapstick Show-Biz Part Two: Chaos on the Set The second part of our Show-Biz programs finds our silent clowns poking fun at themselves and their style of filmmaking. Nothing could be simpler or handier (not to mention cheaper) than using their own studios as background for slapstick antics, which today gives us precious behind-the-scenes glimpses of where and how these films were made. On the bill is Everett True Breaks into the Movies ('16), Charlie Chaplin's Behind the Screen ('16), Hey There ('18) with Harold Lloyd, Our Gang's Dogs of War ('23), and The Daredevil ('23) starring Ben Turpin. All programs (except Dec 6) will be held at the Arclight Theatre, located at 152 W 71st Street, between Broadway & Columbus. Click on theatre/tkts for theater details and info. Tickets are $10 all adults, and $5 for seniors, kids and members. Live piano accompaniment by Ben Model at all shows. -- Bruce Calvert

I realize that most of

you don't know who these actors are, or anything at all about the films in question, but the one that caught my eye, and has fired my imagination, is the mention of Everett True Breaks Into The Movies from 1916. Up to this point, I had thought that there were no ET movies at all.

Everett True was a comics strip that ran from 1905 to 1927. He was a big man with a bowler hat and an umbrella. He brooked no insolence, took no guff, suffered fools not at all. He did, in other words, the things that you and I would like to do, but don't, because we fear reprisal or the consequences of such rash behaviour. It was a brilliant idea for a comic strip 100 years ago; he would work out just as well today. 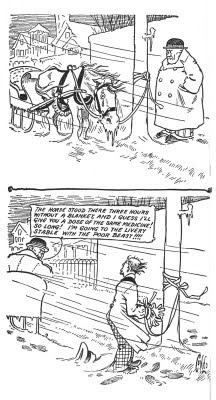 Nearly every strip was set up as two panels. In the first panel, somebody would do something that pissed off the titular character. In the second, he would beat the crap out of that person and/or berate him for that boorishness. Many of the strips, if you read them today, might appear to have been written this week, as much of that behaviour still happens. How would Everett True react to cell phones and how they're used by people who want the world to know what they're discussing, anyway? And I've given up the number of times I wish I had had Everett's courage when jerks talk within my earshot during a concert at the Metro Center or the Rebecca Cohn or something.

The strip stopped running in 1927 and languished in obscurity for decades until a small book company reprinted some of the strips in the early 1980's. That might have been the end of it if the book had not been reviewed in a publication called "The 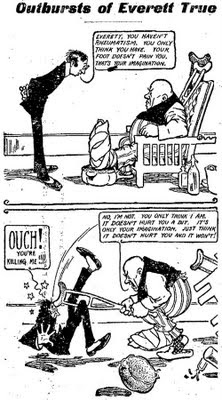 Comics Buyer's Guide". A writer for that magazine, Tony Isabella (who is the same person who inspired me to start this blog, by the way) read that review and thought that he could revive it with new strips to run in CBG most every week.

Turns out Everett was a comics fan who hated boorish fans, artists who blew their deadlines, endless storylines, and so much more. Same 2 panel format. I probably have a few of them around the house and will try to find them for you.

Frig, I loved the character. I loved him so much that I briefly wrote an Everett True comics strip for my university newspaper around 1987. They sucked, mightily, as did the ET article I wrote for that same newspaper. I don't know if I still have those strips in my old filing cabinet in Port Williams or not. If I do, and find them, I'll burn them. Yes, I'm that embarrassed about them. 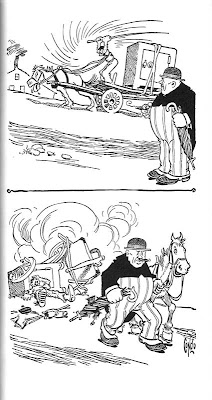 At the character's height he inspired a series of films, the one cited above being the first, and which seems to be the only one to exist. This is not surprising, given that the vast majority of silent films do not exist in any form.

(I will do what I can to get my hands on a copy of the extant Everett True film. I am interested enough to see it. )

The CBG series stopped around 1990 or so. But the character's name continues to be used. 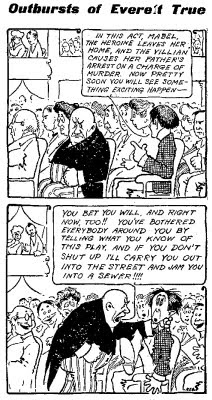 There is a music critic in the United Kingdom who took the name of Everett True, perhaps because he takes no prisoners with his album reviews. I don't know how many of this Everett True's readers get the reference and realize that the name is more than 100 years old!

If there is a lesson to be learned from Everett True, it is that we should all be kinder to one another. Don't butt in lines. Don't speak during a movie. Be nice to animals. Don't gawk at women's ankles. Common sense stuff.

If we are doing something that might be pissing off another person, then try to imagine what that person might be thinking, or what he might want to do to us. That guy might wish he were Everett True, if he knew there had once since been such a character that is.

I'll write more about this amazing character at a later date.

Email ThisBlogThis!Share to TwitterShare to FacebookShare to Pinterest
Labels: Everett_True

You're probably aware now, given how long ago as this was posted, but "Everett True Breaks Into the Movies" (1916) is available on video from Harpodeon.com if you still want to see it.

I do want to see it. I had heard there was an ET film series, but not that one of those films was online.

Thanks so much for letting me and my readers know!