Say Hello and Goodbye to my friend Reg Short. Until 2009, he and his lovely wife Betty were our neighbours at our cottage in Pictou County.

This picture was taken on August 12, 2005 at our other neighbours, the Taylors. They had invited Reg and Betty and Patricia and me 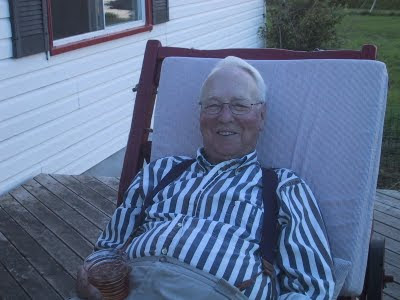 over for drinks and victuals, and we were only to glad to walk the 125 feet from our door to theirs.

Reg and Betty bought the cottage next to Patricia's parents in the late 1970's. Reg was employed as a manager for the phone company. After his retirement around 1982, he and Betty began to spend the majority of their summers at the cottage, arriving in late May, and not shutting 'er down until around Thanksgiving.

After Patricia's mother died in 2004, Patricia acquired the family cottage; and now it's hers, and we spend the majority of our summer vacations there. People keep asking me why we don't travel to Cuba or Europe or Zanzibar or whatever. The short answer is that I hate traveling and would not wish it on my worst enemy. The long answer is that our cottage is already Heaven to us. It contains almost everything we need (except high speed internet service, cable/satellite and other guy stuff). Until 2009, it also contained Reg and Betty.

The cottage became a chore to them over the last couple of years. Reg was getting on. Mowing a big lawn even in a lawn tractor when you're 80 years old is taxing to say the least. In weak moments, they would admit the whole thing was getting to them. Other times, Betty would be on their veranda, reading a book; Reg would be sitting by the entrance to the shed sneaking a cigarette because Betty did not approve of his occasional smokes. In, ahem, short: They loved their cottage as much or more than we love ours, which is saying a whole lot.

They finally decided to sell the place this year. It could not have been easy for them to do this, because I know it will be painful for us when we have to give ours up. I'm pleased that the new neighbors love Reg and Betty's old place as much as Reg and Betty did.

Reg took a fall at the home on November 30th. He was taken to the hospital and put on a waiting list for hip surgery. The surgery finally happened on December 3rd. He did not survive the operation.

Patricia admitted that she would have loved to have had Reg for a father. I can see why. He was a wonderful man, and I am a little jealous that she got to know him for more than 30 years, and me, not nearly as long.

We visited the funeral home this evening and saw Betty and promised her we'd be at the funeral tomorrow. We want to say our final goodbyes to our friend Reg. I know he'd do it for us.

Goodbye, Reg. We will miss you.

Email ThisBlogThis!Share to TwitterShare to FacebookShare to Pinterest
Labels: Reg_Short

Thanks for the kind words, hon.