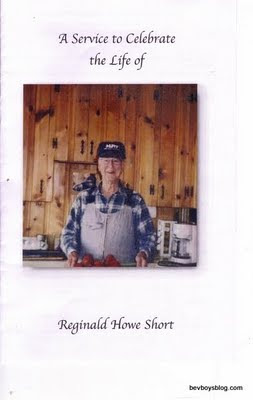 We attended Reg Short's memorial service today. Thought I'd tell you about it for a bit.

It was in downtown Dartmouth, at the First Baptist Church, at 2pm. It is a huge church, right there on Ochterloney Street. 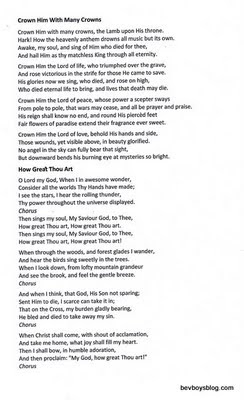 The service was very nice, befitting a very nice man. The minister gave a passionate eulogy for a man he would have known for 30 plus years and who, despite being 81, was taken from us too soon.

The picture of Reg that accompanies this post was taken at their former cottage in Pictou County. He's holding a 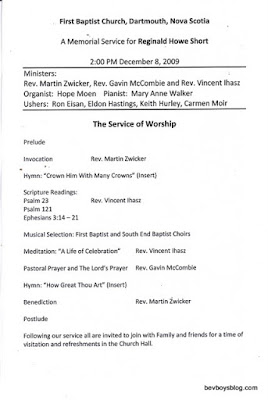 container of some kind that has lobsters in it. We were in that cottage, in that kitchen, many times over the years, and shared meals with the Shorts more than a few times.

Patricia thinks this picture was taken the time she and Reg went to the nearby community of Toney River to fetch lobsters from a wharf that sells them in season. They had left at six o'clock in the morning to get them. The boats hadn't arrived yet, so Reg regaled Patricia with his silly and clean jokes. That morning is one of her favourite memories of him.

It is easy to become maudlin, even mawkish, during a funeral or its aftermath. I have always believed that a funeral should be less about the sadness because there's going to be lots of that anyway. It should be about a celebration of a person's life. Today's was. I am jealous of those who got to know Reg for a longer period of time than I did.

One of my favourite funerals, if that's a word I can use, was for a cousin who died 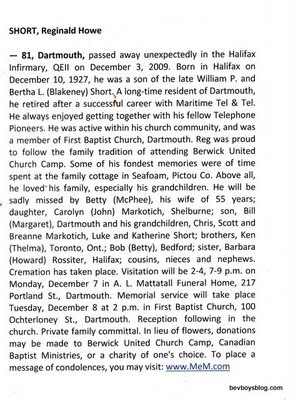 in 1998. As sad as a death from cancer is, the minister told such funny stories about Gordon that we laughed as much as we cried. I'd like my funeral to be that way. I just hope people can think of nice things, funny things, to say about me.

How about the time I...hmm, that wasn't funny at all. Someone lost an eye and I had to hide in the woods for 3 days.

Anyway, Reg's life was well-lived. He was a good man, and a good man deserves a good funeral. His, today, was all that and a lot more. We lost a good friend. Betty lost a good husband. Their children lost a good father. While there is nothing good about this loss, we can at least take comfort in his having been a part of our lives for as long as he was.

Rest in peace, my friend.

Bevboy
Posted by Bevboy at 5:01 PM

Email ThisBlogThis!Share to TwitterShare to FacebookShare to Pinterest
Labels: Reg_Short