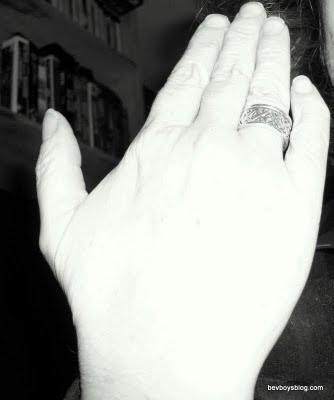 This is a picture of Patricia's hand, taken about an hour ago. Notice the ring. It is the subject of this blog post.

The ring disappeared a few months ago, around the time Patricia moved in. Shortly thereafter, Newbie was running around the area of the house where Patricia kept a couple of her rings. She thought she saw Newbie knock the ring into a garbage can; but even if she did, she could not find it at all. No matter. No how.

Today, as she was preparing for Reg Short's funeral, she opened a box of her jewelry that she had not opened since the move in. She opened a small box within that box. She was looking for a brooch of her mother's, an angel. She found it, all right.

But, next to that brooch... that's the crux of the story.

Next to the brooch was the very ring she had not been able to find in months.

She asked me if I had secreted the ring away. I had not. Why would I?

She certainly had not done so. Why should she?

The cats don't have opposable thumbs. Or thumbs at all, come to think of it. They could not have done this.

So, how did this happen? How did this ring mysteriously end up next to her mother's brooch? Did her mother some how play a role in this, some five years after her death?

Maybe I should call George Noory during the next open hour of Coast to Coast AM! They may be able to offer us some keen insights into this amazing story.

That's it for tonight. Three posts in one night is a lot, folks. You don't pay me enough to do more.

Bevboy
Posted by Bevboy at 6:02 PM