How many shades of brown must my nose become in order to satisfy this new fetish of mine, to pose with a different Christmas tie every work day up and including Christmas Eve? Is there no price to my dignity? Is there no stone I will leave unturned in my quest to make these photographs as interesting at possible? 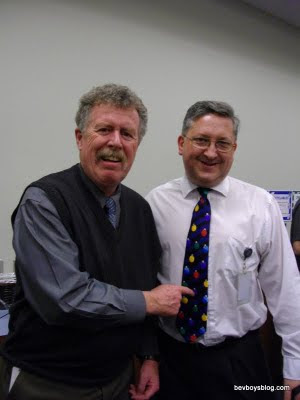 At my work this afternoon, I approached the minister of the department I work for (well, sort of; I don't technically work for the department any more. It's a long story.) and asked him to pose for a couple of pictures with me. He agreed because Bill Estabrooks is a nice guy. In addition to being my minister, he's also my MLA. I have had occasion to have had dealings with him over the years, and they they were always pleasant and cordial.

I have been a civil servant long enough to know that you really don't mess with senior management. Say hello to them in the hallway? Sure. But to approach them to do anything, even something that would make them look good? Well, let's just say I've been burned a time or two over the years and don't want a repeat performance.

I was nervous about approaching Mr. Estabrooks, but he made me at ease while the fellow who took the 2 pics did so.

I am off on Friday. No tie. Back to work on Monday. I know what I want to do for Monday's tie. Tuesday's tie will be something I have never done before, and I don't know if I'll have the courage to follow through on it. We'll have to see. I have an idea for Wednesday's tie, and that's even more audacious than Tuesday's.

Bevboy
Posted by Bevboy at 4:04 PM

Email ThisBlogThis!Share to TwitterShare to FacebookShare to Pinterest
Labels: Christmas