I decided to make a quick trip to the Valley this morning to take my mother shopping, and to visit my father in the hospital. 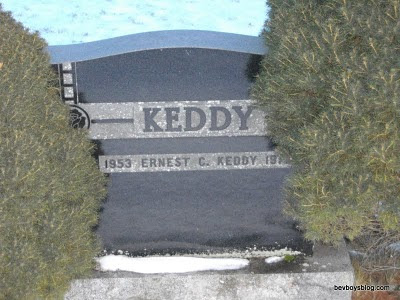 As usual, my mother wore me out.  It is impossible to keep up with her. The shopping gene is recessive in some women; but it is highly dominant in my mother.  At an age when most women would be slowing down, putting their feet up, knitting, whatever, Mom can still shop with the best of them.  Leaping over the aisles like a fading quarterback, she has earned the grudging respect of other women who yearn to be like her.  With a sly wink, she leads people to believe that she is interested in one item, when in fact she wants another.  She feints to the right as they assume she is going to the left.  It is amazing to behold.  If there is a Shopping Hall of Fame, then my mother is destined to be in it.

We visited my father after lunch.  After the visit, we shopped some more, of course.  We finally returned to the family home shortly after 4pm.  My sister Glenda had called earlier in the afternoon to tell me that she had purchased a wreath for our brother's grave and would I like to go with her to lay it?  I said sure.  I called her and she agreed to pick me up at the house and drive us there. 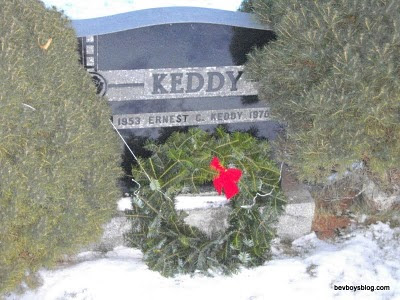 When my brother died in 1970, I was 5, pushing 6.  I had no concept of death.  I have discussed my brother here before; check out post 500 from November of 2008 if you want more detail.   But in all the years since, my father would always, always, buy a wreath for his grave at Christmastime.   In the early years, many of us would go with him.  As the years and then decades passed, this became more of a solitary ritual my father performed every year.  I don't think it was anything personal against my brother that we mostly stopped going.  It was just that we felt that it was something that Dad had to do and that we were in the way.

This year, my father is in the hospital for an interdeterminate period of time.  I'll leave it at that.  He is in no condition to deliver any wreaths to anybody.  So, when Glenda called me today and asked me if I would like to go with her to take the wreath to our brother, to pick up the mantle, to carry on the tradition, then of course I said yes.

I'll be there every year from now on.  It's the least I can do.

You can count on it, Ernie.

Bevboy
Posted by Bevboy at 3:52 PM

Email ThisBlogThis!Share to TwitterShare to FacebookShare to Pinterest
Labels: Christmas