Welcome to yet another new series of Bevboy’s Blog posts.  I call it “The Early Bevboy”, and it will features stories and anecdotes about my past.  Unlike the Stupid Things series, which focuses on dumb things I have done or had done to me, these will be stories that I just happen to find interesting or funny or poignant.  It will be another intermittent series.  There will be lots of entries as I have lots of stories to tell.

I visited my folks yesterday: Mom at home; Dad 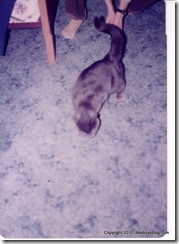 in the hospital.  Upon returning Mom home, I went into my old bedroom, where I still have some stuff (even though I know I shouldn’t be keeping any of my stuff there) and began to root through my old desk and chest of drawers and filing cabinet, all in an effort to find a certain piece of correspondence that I want to share with you.

I had no luck finding that piece of correspondence, but I’ll keep looking.  It will form another entry in this series down the road.  However, I did find some other things, photos mostly, that are interesting enough that I’ll put some of them up here for your edification, enjoyment and life enrichment.  You’re welcome.

You are looking at pictures of my first cat, or, I suppose, the family’s first cat.  We had had a dog in the early 1970’s, but my mother rejected it, and it ended up living with our uncle.

In the summer of 1980, August I think, my sister and I heard a mournful cry from our woodpile, behind the house.  The cry continued all night and into the next day.  That afternoon, Glenda managed to coax a cat out of the wood pile.  I don’t know what she did to this day.

Our best theory was that someone 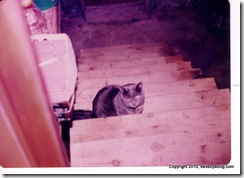 had dropped off this kitten on the side of the road and left it to fend for itself.  It is a minor miracle that a fox or maybe even a coyote didn’t catch it.

We kept the cat.  We named him J.R. because, as I just stated, this was the summer of 1980.  It was the summer of “Who Shot J.R.?”, when Larry Hagman’s character on the television show called “Dallas” had been shot and possibly killed.  You younger people reading this have no idea how big a series that was in its day, and how big that cliffhanger was at the time.

Anyway, we knew that my mother would not accept the cat.  My dad was another story.  He grew up on a farm that had cats and dogs and loved animals. As a compromise, we would keep J.R. in our cellar, where it was relatively warm and dry.  We could visit the cat every day and he would be well fed and happy.

J.R. found a way outdoors.  There must have been a broken window or something that enabled him to get outside.  He began to run around the neighbourhood a lot and bring home… trophies.  Birds.  Mice. Rats.  These food sources would be left in our cellar, and were pretty gross.  The bird feathers, he would leave in a box near Dad’s old workshop.

I spent as much time with J.R. as I could.   But, after high school, I went to university, nearby in Wolfville.  I became busy in ways that, looking back, still make me wonder how I was able to get as much done as I did.  I neglected J.R., and I still regret that, all those years later.  But I spent as much time as I could with him, sometimes sneaking him into my bedroom at night and playing with him.

As my schedule got away from me, J.R. began to fend more and more for himself.  As the years passed, we saw less and less of him.  By 1986, he was becoming wild, but he would still see me and jump into my bedroom from outside and we’d bond. 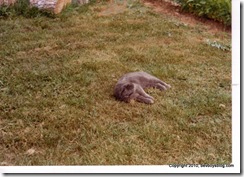 He disappeared that summer.  To this day, we don’t know what happened.  It’s likely that another animal got him.  There’s a good chance that he got run over by a vehicle.  We will never know.

I didn’t have another cat after that for many, many years.  I felt so wracked with guilt over what had happened with J.R.  I had not been as attentive to my cat as I could have been, as I should have been.  I was too busy.  I was too neglectful.  It was not until 2003, when Patricia got Cindy Clawford, and 2006, when I got Newbie, that the joys of having a cat were shown to me again.

This time, we make sure, damned sure, that our cats remain indoors as much as possible.  Cindy used to roam around Patricia’s old neigbhourhood.   Patricia put her on a tether and walked her around, or kept her tethered to her deck.  Now, Cindy doesn’t want to go outdoors, not even when we’re at the cottage.  Newbie runs away

when I open the door to go outside.  That’s a good thing.  That’s the way we want it.  Both cats have 3 floors of house to run and roam through, which should be plenty.

After all: What else are friends for?

Next time: Preparing for my high school graduation.