Welcome to the second part of this irregularly-published series of early events in my life.  They will be inspired mostly by early photographs that I find and scan in and which cause me to remember the events and context surrounding those pictures. 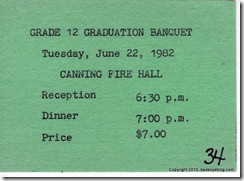 You are looking at one of the 3 tickets for my high school graduation’s dinner for June 22, 1982.  It was held at the Canning firehall in that fine village.  I was back in that firehall just a few weeks ago and couldn’t get over how bloody small the place was.

I bought 3 tickets in the hope that both of my parents would accompany me.  That turned out not to be the case.  For reasons I have never known, let alone understood, my father declined to attend the dinner, so my younger sister, Glenda, attended instead.  My mother went.

I had taken it upon myself to be the “Class Prophet” that year.  I had no idea what that was until I had leafed through some other yearbooks and seen this delightful role.  A graduate with a sense of humour and maybe some writing skills, speculates on the futures of his or her fellow graduates.  They couldn’t find anyone with a sense of humour or writing skills, which is why I ended up doing this.

I began writing this in April, tirelessly scribing the future of my fellow grads.  The ones I didn’t like, met dire fates.  The ones I liked, met amusing fates, like being consigned to living in the town of Windsor, Nova Scotia, which I continue to view as a place to avoid at all costs.

At long last, I presented the class prophecy for the Cornwallis District High School graduating class of 1982.  I began with the tale of two graduates who had reached the summit of professional boxing.  One of them was a strong, muscular guy; the other… wasn’t.  But I still had the latter beat the crap out of the former, a revenge of the nerds spectacle 2 years before that movie even came out.

People laughed in the right places. Sometimes, there were gasps of laughter, and to this day, I don’t know what was funny about some of those prophecies.  I teased one of the home room teachers because he had changed his hair style, “probably several times”.

I was told that my reading was the event of the evening.  I will not comment on that other than I still look back fondly on it and would do it again if I had the chance.

I still have an old filing cabinet in my old bedroom at my parents’ place. I am pretty sure I have a version of that class prophecy in it. Perhaps I will dig it out, dust it off, and scan it in for this blog.  Hmm. Yes.  I would like that.

I will write of my actual graduation at a later date.

Next time in this series: An early birthday party.

I remember going with mum and yourself and laughing in all the right places. Cheers and keep laughing bro :)
g