Welcome to the third installment of my latest series, The Early Bevboy.  It will feature stories of my early years, back before life had had a chance to kick the crap out of me, and my future was bright and beckoning. 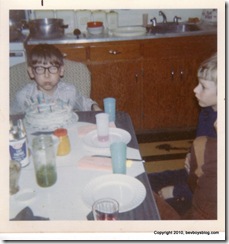 You are looking at the only 2 pictures I know of from my age 10 birthday party.  That’s me in the glasses.

This would have been taken on or about February 23rd, 1974.  That date fell on a Saturday that year, so it stands to reason that the party took place that very day.  It probably did.  I mean, we wouldn’t have skipped school or anything like that.

I remember the party quite well.  My sister and I were allowed one birthday party each, and I chose my 10th birthday for this august event.  I invited a few of my friends.  The blonde kid to my left is Mike Porter; and the redhead in the brown clothes is Craig Newcombe.  I know that Craig still lives in Port Williams and perhaps still serves on the county council down there.  I don’t know what’s become of Mike.   There may have been one or two other guys there, but I just don’t remember right now.

Anyway, we were allowed this one party.  My mother and older sister, Gayle, purchased some chocolate bars and other treats to smuggle into the movie theatre that was then in New Minas.

Those of you from that part of the Annapolis Valley may be scratching your heads right about now. “There was no movie theater” in New Minas in the 1970’s.

It wasn’t there long, but it was there when I was 10 years old, and I got to go there the one time.  It was in what we then called the Towers Mall, or the Country Gardens mall.  It’s gone now, replaced by a parking lot between the few stores anchored by the Scotiabank and the Wal*Mart in New Minas.  I think it was roughly in the location of the original spot for the Dutch Canadian Shop, but this was so long ago that it is hard to recall. 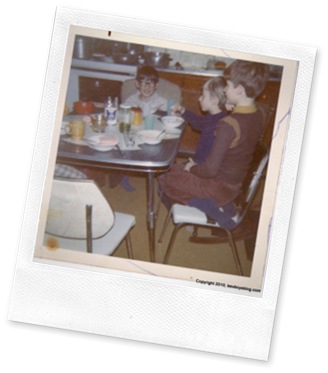 It was a very small theater, probably not much more than a 25 inch tv.  People would walk in and huddle in front of it and watch whatever second rate crap the owners managed to bring in.  The business didn’t last very long.  I remember they had really trashy movie posters.

I have no recollection of what film we watched on the screen.  I remember buying a Superman comic book that day and my chums strongly hinting me to buy something.  The Superman comic was probably written by Cary Bates, and I know it was pencilled by Curt Swan.  Be nice to know what issue it was.  The story had something to do with nuclear bomb fallout and how Superman had to stop it, because nuclear bomb fallout is bad.

We got back to the house and ate the cake and ice cream, because we hadn’t had enough junk food that day yet, not after gorging on chocolate bars and pop all afternoon.  I opened my prezzies, which included some of the stuff my friends had urged me to buy.  Clothes for my G.I. Joe, or whatever it was.

There’s not much more to add.  The kitchen is still pretty much the same, or at least the cabinetry is.  The stove has been replaced a few times, and so have the table and chairs.  Except, the rocking chair that Mike is sitting in is still in my parents’ home.  It was old then; and is 36 years older now.  I think it belonged to my mother’s grandmother!

Seeing these old pictures takes me back to a much simpler time.  I am enjoying these walks down memory lane.  I hope you are, too.

Next time: A Christmas party, and a tale about something that’s only happened to me once!

hee hee hee I remember going to that movie too; way too much junk food that day! unfortunately I don't remember the movie of the day either...