Welcome to the eighth edition of Things In Halifax That Just Don't Make Sense (TIHTJDMS). This occasional series, as I have explained before, discusses things in the city of Halifax that might at first glance appear to be interesting. Upon reflection, however, it doesn't make any kind of sense. 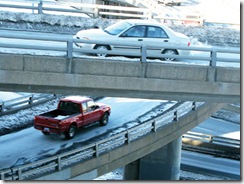 You are looking at a couple of pictures of the Cogswell Street Exchange.  It is a butt ugly waste of space.  It is a road that goes nowhere.  It separates the Barrington Street part of downtown from the North End of the city, leading to the perception that it’s a sub par section of the city.  It is a confusing array of streets that have no purpose, and no reason to be here.

It didn’t start out that way.  Originally, the exchange was going to be part of a new highway that would run through the waterfront.  But, to do that, they would have to tear down some historical buildings, lovely buildings that had a lot of life left in them.  There was a hue and cry; and as one of the first examples of heritage and heart winning over business and the will of city hall, these buildings were not destroyed.  40 years later, we still can enjoy the Historical Properties section of the waterfront.

This meant that the Cogswell Street Exchange didn’t really have anywhere to go.  As it was, neighbourhoods were destroyed to make space for Scotia Square.  Lanes go up and down and over and under other lanes of traffic, and to no real purpose.  Even after driving through the exchange for all these years, I still find them confusing and marvel at the sheer waste of concrete.

There has been much talk of tearing down the exchange and 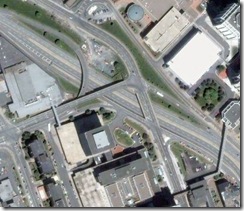 replacing it with… something.  It won’t be a new convention centre, because that’s going where the Midtown and the Herald building are.  Maybe a new Metro Centre, for concerts and maybe a CFL team?

Who knows?  All I know is that the Cogswell Street Exchange just doesn’t make any sense.  It never did.  It never will.  I can’t wait for it to go bye-bye.

Next time in this series: Go ahead and build it, already!

Yes, Bev it needs to go! Been working on its demolition since 2000 when I was first elected... the rationale is there, now we need another push from the public to help with the political will ( help!)
lol
Cheers
Dawn

And, thanks for providing the links to the pics that I used, Dawn! It saved me the trouble of freezing my friggers off taking pics during my lunch hour tomorrow.