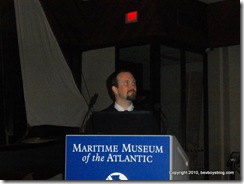 fascinating evening tonight.  I think I’ll take a few paragraphs to tell you about it.

First of all, I did another spin class this evening, my second in 4 days.  From there, I walked to my car and drove it to a local grocery store where I got some sushi.  Scarfed that and then drove to the Maritime Museum of the Atlantic, where the topic of discussion would be Halifax during World War II.

I don’t go to that museum nearly often enough.  Time was, all entry to all Nova Scotia museums was free.    Now, it’s anything but, with fees ranging to several dollars per visit (although you can get a deal by pre-paying for a year).  I resent having to pay to enter a museum, and out of silent protest, don’t go very much.  As luck would have it, Tuesday nights are free at this museum.

At any rate, the presentation started around 7:30, and continued until 8:30.  The presenter showed slides of the city during that famous period and told us some interesting stories of that time.  He showed us a pic of the HIndenberg flying over Halifax.  We saw Piercey’s, the lumber place on Robie Street, on fire.  You can just make out the smoke stack which is the hallmark of that place to the present day.

They do these presentations nearly every week.  There will be another presentation about Halifax at wartime coming up in April, this one by a guy who wrote a book on the subject in the last year.  Try to keep me away from that.

I gave the presenter a Bevboy’s Blog business card. I don’t know if he’ll check out this blog, or throw out the card, but at least I’m trying, folks.