Hello again, gentle readers.  Welcome to the fourth instalment of the Early Bevboy, the adventures and misadventures of my misspent youth. 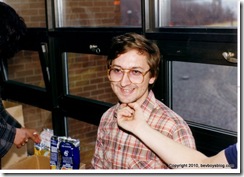 You are looking at a picture of me taken on December 13, 1986 at the BIO Christmas party.  BIO is short for the Bedford Institute of Oceanography, where I had a 4 month work term from September through December of 1986.  Yeah. I remember dates.  Get over it, already.  I was 22 years old when this picture was taken.

I remember that place quite well.  My boss was a middle-aged British guy named Aubrey Fricker.  AFAIK, he still lives in Halifax.  From time to time, he speaks at Halifax Council meetings and makes it on tv.  Dawn Sloane may remember him.   One day, Aubrey told me I was an anomaly.  Another time he said, “Oh, Beverly.  You can’t be as insecure as you make yourself out to be.  You just can’t!!”  I think it was a compliment.  I’m still not sure.

BIO is a big, sprawling complex, and more than once I took a wrong turn and ended up someplace I shouldn’t have been.  Typical male!  I never asked for directions.

The appendage growing out of my chin belonged to a co-worker named Robin Wylie.  I had never seen him before September 1986; and I haven’t seen him since the day I dropped him off at his Dartmouth apartment in December of that same year. But we got along great.  He had told me that his brother was a paramedic.  I’d see him around working, but he was murdered years later in a botched drug raid.  Pretty sad.

But, Robin and I were friends for that period of time.  We’d go out and have a liquid lunch at the nearby  Ship Victory and stagger back to work for the afternoon.  It was shameful.  I’d never do anything like that now.  Hic.

Robin was very gregarious.  He was also popular with the ladies.  I suppose he was a womanizer, but nobody was getting hurt and nobody was forced to be with him, so it’s nobody’s business.  I do remember his mother told him, and he told me, that Robin thought with his balls.  I can tell you that my  mother has never told me that.

In the tease for this post, which I left at the end of the previous entry to this series, I promised to tell you about an event that had never happened to me before, and hasn’t happened in all the years since.  Here it is.

Sometime around the time that photo was taken, another person we worked with, a German girl named Solly, asked me out to a Christmas party that would take place at… The Mic Mac Aquatic Club, I think it was.

I remember being shocked because… well, that had never happened to me before.  I looked behind me to make sure she wasn’t talking to someone else.  I did this, despite the fact that I was leaning against a wall at the time.  The date was  chaste.  Nothing happened.  Darn it.  Solly and Robin started dating upon their return to Ontario in 1987.

This was my second co-op work term sponsored by my university.  I’ll tell you about the first one, some other time.

There’s not much more to tell.  There was the 38 year old woman who was going through a divorce and wanted to go out to dinner with me.  That happened during that time.  There was the dance at the MIc Mac Aquatic Club where I had a great time.  But, the actual job at BIO was boring and monotonous.   The dirty little secret of most of those co-op work terms is that we get the crappy jobs.  Either that, or they’re worked nearly to death for not much money, which I saw happen as well.

Solly gave me a small Christmas present.  I think it was a joke-type book and a Christmas mug.  I believe I still have those items in my old bedroom at my parents’ place.  I haven’t seen any of those folks since.  But, I did hear about Robin and Solly’s relationship when I attended a friend’s wedding in 1991.  Their mutual friend was there, and we talked about them.

This job kept me in Dartmouth every day for 4 months.  I commuted every day, first with a private van company, and then with some guys who drove back and forth each day.

Barely a year later, I moved out of my parent's’ home and got my own apartment in Dartmouth, at 55 Dahlia Street.  I continued to think of my friends at BIO while I lived there, but seldom think of them now.   This post tonight represents my first thoughts on Robin, Solly, Darlene Nauss, Aubrey Fricker, and the others, that I have had in some time.  I’m happy that most of those memories are pleasant ones.  I hope that all of them are content with their lives and that they haven’t forgotten me completely.

Next time in this series: An important magazine.  To me, at least.

You lived such an exciting life...