You are looking at a picture of me and my friend Paul taken on September 22, 2004.  We were dressed up as convicts on a good, old-fashioned chain gang. 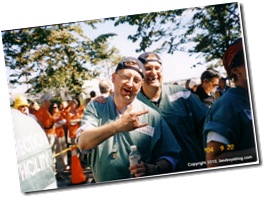 You remember those from your childhood, don’t you?  Sure you do.  It was all an effort to raise funds for the provincial United Way campaign that year.

I remember it well.  We marched down Lower Water Street in Halifax to the place of the United Way competition, where our department was competing against other departments for, among other things, best costume.  Of course, the department that had the hazmat suits won.  They always do.  The bastards.

One of the competitions was to run like mad whores into the Maritime Museum of the Atlantic (the same place I went to last week for the talk about war-time Halifax) and find some stuff.  But one of the rules was that we could not make too much noise while in there, and could not run.  As you might have guessed, a bunch of women played a role in organizing these events.

The funny part of this story came afterward.  I told my boss, Rod, about how tired and sore I was after running around with Paul for a couple of hours; we were handcuffed together, you see.  Rod laughed, and then revealed to me that Paul had told him that he, Paul, was sore because I, Bevboy, had made him run so fast for a couple of hours!  Turns out we were competing against each other and didn’t know it.  Poor communication between the two of us, I guess.  I talked to Paul about it afterward, and we shared a laugh, and promised we would never be handcuffed together again.

Besides, he’s married now.  The wife wouldn’t like it.

Email ThisBlogThis!Share to TwitterShare to FacebookShare to Pinterest
Labels: Funny