Holly Bartlett would have loved her funeral.

it’s cliche to write that.  People always say that so-and-so would have loved her funeral.  But, I really believe that.

Hundreds of people showed up at the Atlantic Funeral Home on Main Street in Dartmouth this morning.  There were so many of us there that we had to be place in the overflow room, and that room became standing room only. 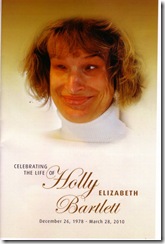 There were tears, and lots of them.  But there were plenty of laughs, too.  Her sisters told some funny stories about Holly’s strong will, her tenacity, and her great humour.  Her most recent boss at the Nova Scotia Public Service Commission mentioned how Holly would have a knack for always knowing, sensing, when someone was down and find a way to bring him or her back up, likely with an ironic comment like, “You look really nice today!”

A former co-worker named Charlie, also blind, told very amusing stories about working with Holly, like the time a cabbie picked them both up to go to a meeting in another part of the city.  The cabbie saw Charlie’s dog, but assumed that Holly was sighted, and told her to hop in the back seat.  She did so, but kept on going, landing on the ground, because the cabbie had opened both doors and Holly didn’t know it.

Charlie also told of how his seeing-eye dog would 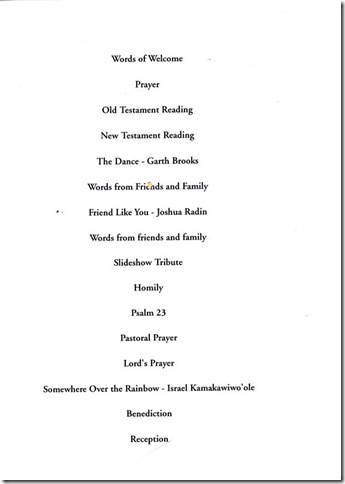 walk Charlie through the downtown.  The dog would guide Charlie around groups of people or establish eye contact with people, getting them to move out of the way.  This didn’t work one day when a woman walked right into them both.  Turned out to be Holly!  Sometime afterward, this happened again.  Charlie said, “Holly, is that you?”  Holly replied yes.

Such funny stories, punctuated by sadness and a strong sense of loss.  We’ll never know what she could have accomplished, but one imagines it would have been a lot.

I cannot remember, in my 46 years, meeting a more life-loving person than Holly Bartlett.  Just how busy she was during her short life, how much she was able to accomplish, has only become clear to me in the last few days.  Her degrees and other academic achievements.  Skydiving with my friend Kirk. 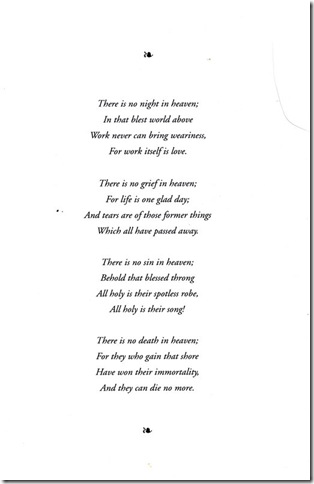 Dancing.  Walking the streets of downtown Halifax by herself, aided only by her cane.   I hope that people remember all of those things and do not focus on some of the murky circumstances surrounding her death.

Holly would have wanted it that way.

In fact, she would have insisted on it.

P.S. Our Toastmasters meeting last night was partially about Holly, too.  We had a half hour tribute to her after the guests went home.  A.J., a pastor and devotee of this blog, said some beautiful things about her, and we capped it off with something that Toastmasters folk don’t do very often: We raised our glasses, in a toast, to Holly Bartlett.

P.P.S. I keep thinking of all the times I saw Holly walking around the city.  I’d see her walking to Toastmasters meetings and accost her.  From time to time, she’d ask if she could hold my elbow while we walked the last couple of blocks.  It was always my pleasure to squire Holly to our meetings!

Email ThisBlogThis!Share to TwitterShare to FacebookShare to Pinterest
Labels: holly

Thanks for sharing this...Holly is my sister and was such a wonderful person.

I'm glad you had the great opportunity to know her.