Just over a week ago, Patricia and I drove to the Valley to visit my folks.  Patricia stayed back to cook some meals for my mother whilst I purchased groceries for my mother.

This is the point where my little troll friend, the illiterate one, the one who drags one foot behind the other one, makes some kind of little dig at me.  So, let’s give him a few lines to do so.

That should be enough, 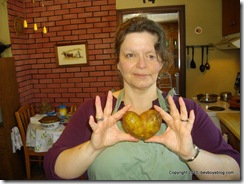 assuming he keeps his crayon between the lines.

Where was I?  Oh, yeah!  Food.  Anyway, Patricia was getting ready to peel potatoes when she discovered this one.  I had to get some photos, and here’s but one of them.

All together now: Say “Awwww!”

You, too, troll!  It’s only one syllable.  Surely you can manage that much.

That afternoon, we moseyed our way over to Wolfville to visit a friend of mine from high school.  Heidi found 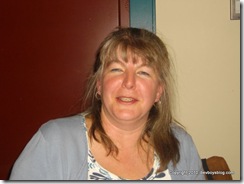 me on facebook a  year or so ago, and it’s been a pleasure to rekindle our friendship from those halcyon days or yore.   She wouldn’t date me back then, and wouldn’t date me now, even if we were both single and the survival of the species depended on it.  Some things never change.  Kinda comforting, that.

I have included a picture of the cat who lives at the inn in Wolfville where Heidi works. 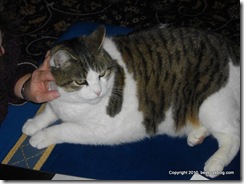 Heidi, what’s the cat’s name again?  He’s a big furball, and is about 20 years old.  That’s mighty old for a cat, although they have been known to live to be nearly 30.  It’s possible that the inn cat will live for years and years, assuming it wants to.  You know what cats are like.  I’m lucky if Newbie momentarily makes eye contact with me after I feed him every day for a month.  And woe betide me if I don’t feed him in the middle of the night when he gets hungry.  He’ll seek retribution if I don’t.  Yeah.  You know what cats are like.

More in a bit, if you’re good.