If someone asks you to have lunch at the Elephant and Castle in downtown Halifax, say no. Be emphatic about it.  Don’t go.  Just don’t.

Let me tell you about my recent, and last, experience there.

This past Friday, the boys asked me to go to lunch with them.  It is a thrill for them, you see, and I wouldn’t want to deprive them of it.  They had decided at the Elephant and Castle.  I tagged along.

We got there a few minutes after noon.  We were taken to our table.  We waited a few minutes before someone took our drink orders.

We got our drinks.  The server told us what the specials were for the day.  One of them was a BLT, and I decided to go for that, as you can see on the accompanying receipt.  I didn’t want fries, so I asked for a caesar 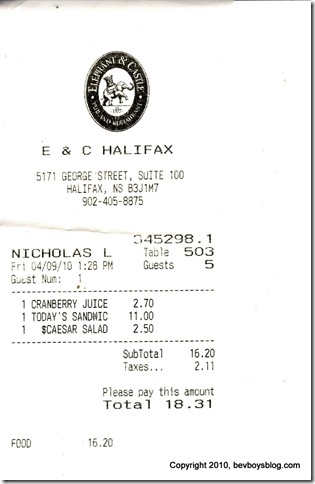 salad instead.  No mention was made of their being a change in the cost of the item.  The rest of the boys ordered their meals.  My friend Steve ordered steak and chips, but opted for sweet potato fries instead of regular fries.

We chatted about the issues of the day, including sports.  I participated in the sports discussion as best I could, even though they were discussing topics and sports which made no sense to me.

It was upwards of 40 minutes before we got our food.  I got my BLT and salad, or should I say, half BLT.  It was not a full sandwich.  My friend Steve had to wait an extra few minutes before he got his food.

My sandwich was of acceptable quality, but there wasn’t enough of it.  The salad was just awful.  It was all lettuce with a tiny bit of cheese.  No bacon bits.  No croutons.  Barely any dressing.

Eventually, we got our bills.  Mine and Steve’s are included in this post.   I nearly crapped myself.  The special sandwich of the day was $11!  What’s so special about that, especially in light of the fact that it was only half a sandwich?  I asked the server why my sandwich had cost me so much when it was only half a sandwich.  He took off to the kitchen and returned a moment later, explaining that I had received a full sandwich, but one half had been piled on top of the other, like a clubhouse.

Notice, too, that I had been penalized for the sin of asking for a salad rather than fries.  My friend Steve had been similarly

punished for asking for sweet potato fries, as we both had had to pay an extra $2.50.  His beer had cost him dearly as well.  My cranberry juice, in a small glass, had set me back nearly 3 dollars.

The server explained about the sandwich but then added that he didn’t think I believed him.  I didn’t say anything because I know they have bouncers and I didn’t want to get in an argument with the guy.  I just wanted to get the Hell out of there.  So did my friends.

We paid, and we left.  Steve gave me his receipt and urged me to write a blog post about this experience, which I am just wrapping up right now.

I’ll never go back to the Elephant and Castle in downtown Halifax.  You can take it to the bank (which is appropriate, as the place was a Merrill Lynch outlet for a long time).  The service was slow.  The food quality was poor.  The prices were outrageous.  Life is too short, and there are too many other good -- and much cheaper -- places to eat in that part of the city that I don’t need to darken the doors of that place, ever again.

If your work chums invite you to go to lunch with them at the Elephant and Castle, then do what your conscience dictates.  But, if you do go, have a snack beforehand, make sure you have lots of extra money in your pocket or purse, and take a book with you, because you’ll have a long wait for your victuals.  Or, better yet, suggest another place, like the Pogue Fado, where you’ll get better food for less money, faster.

But, I get the last laugh, don’t I?  I get to tell them what I think of them in this here blog.

That's odd. Typically the food and service is good... me thinks you were there on an off day
Dawn

Thanks, Dawn, but they must have been having a really off day. And, an expensive one, too.

Hope all is well with you and the cats.

*I have spent a few enjoyable evenings at said establishment. For a chain, I found the food reasonably priced and acceptable in quality. Not terrific, but fine. You get what you paid for. Perhaps you didn't ask your server if substitutions cost extra. It's usually mentioned somewhere on the menu. Living in NYC, you assume that anything you ask for that's a change from the published menu is going to cost extra. The wait time seems normal to me. If it were McDonald's I could understand being upset waiting 40 minutes. Again, in NYC, that's an acceptable wait.

I have had some terrific meals in other restaurants and waited 40 minutes or longer for them, and paid more than I paid for my meal on Friday. I don't mind as long as the quality is there. This time, for me, it wasn't.

Try out the Pogue Fado, Shawn. Much better in every way.

In fact, next time you're up, let me know and I'll buy you a meal there, as long as you consent to an interview for this blog.

When I lived in Vancouver, I went to the Elephant & Castle frequently. It was the only restaurant in walking distance of my office. The food, service and prices were all good. I had many good times there and visited other locations.
I was excited when Halifax's opened. Until I went there. I, too, found the prices high and the quality to be lacking. I've only been twice and both times have been disappointed.

Maybe I should institute a new feature on Bevboy's Blog: Restaurant reviews. I've had several comments from interesting people about my E&C experience in just the last hour.

When is my interview ;)

I am getting so much feedback here, and on facebook, too. People are really hating the place.