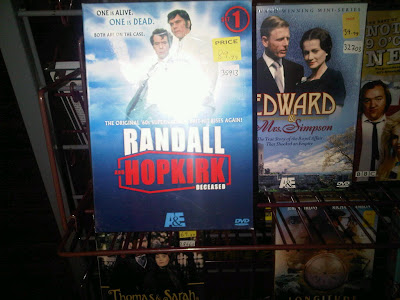 On our adventures in Wolfville this afternoon, before we went into Tan Coffee, we wandered into Light and Shadow video. A rental place for 20 years, it recently became a retail-only joint.

They have a really eclectic film selection. If there's a strange film or tv show you can't find anywhere else, you can probably find it there.

For one example, take a look at this pic. Randall and Hopkirk (deceased) ran in the 1960's. I remember seeing an episode of a show about a cop protected and aided by the ghost of his partner. I recalled that and that they were British.

I had no idea what it was called. To give you an idea of my memory, I saw this the night before I started school, in September of 1969. 40 years later, today, I learned the name of it, just a few kilometers from where I first saw it (for the only time) back when I was 5!

Now, whatever happened to Michelle Hart, the girl I had a crush on in 1973?

From Bevboy's BlackBerry to BevBoy's Blog!