Welcome to the fifth entry in the Early Bevboy. For readers weary of reading about what I did at the cottage this weekend, this occasional series is about things I did or experienced as a young ‘un.  This series is pretty dull, but it’s my blog, and I’ll write whatever I want.  Perez Hilton is down the block, hang a left, go through 2 sets of lights, and the fourth blog on your right, if you’re interested in something more salacious.

You’re looking at a couple of issues of Ellery Queen’s Mystery Magazine, or EQMM for short.  It has been continually published since 1941.

It’s a little sad that most of the people reading this post will have no idea who Ellery Queen was.   Let me explain. 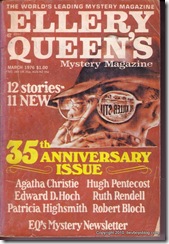 These guys wrote several mystery novels during the 1930’s and into the 1940’s.  Dannay usually devised the plots and Lee wrote the actual books or short stories.  Eventually, Lee was unable to keep up with Dannay’s prolific output, so Dannay hired other people to write the books, based upon Dannay’s plots.  Mostly.  Later, there were EQ novels written by folks other than Dannay and Lee.  Ellery Queen became what’s known in the trade as a house name.

Dannay was also interested in editing detective fiction, producing many anthologies, many of which remained in print for many years.  In 1941, this interest led to the creation of Ellery Queen’s Mystery Magazine, which he continued to oversee until his death in 1982 (Lee died in 1971).  The March, 1976 issue above reprints the cover from that first issue.  It also marked the first issue of the subscription to EQMM that I received, and that’s what I want to discuss in this evening’s post.

In 1975, when I was 11, The Ellery Queen tv show was on the air.  It starred Jim Hutton (father of Timothy) as Ellery Queen, and David Wayne as EQ’s father, Inspector Richard Queen.  I loved the show, just loved it.  There was a whimsy to the scripts, a sense that they weren’t taking things all that seriously.  Someone would get killed, and Ellery would solve it; but before he revealed the killer, he would face the camera, look at us, and challenge us to come up with the solution, before going on to do so himself.

During the run of this show, a guy named Warren Chase was selling magazines for his school.  My father told me, and perhaps my sister Glenda, that he would buy me a magazine, under the proviso that I would read it.  He didn’t want his hard-earned money wasted.  I looked through the magazines that were offered and noticed “Ellery Queen’s Mystery Magazine”, which I had never heard of before in my 11 years.  I selected it, solely based on my love of the tv show.

Dad forked over the cash, and a few months passed.  Finally, in February of 1976, the March issue of EQMM arrived in the mail.  I proceeded to sit down and read short story after short story.  There were tales by Edward D. Hoch, Robert Bloch (who wrote, among many other things, “Psycho”), Ruth Rendell, Agatha Christie, and others.

Rather than all being whodunits, there were plenty of crime stories.  These were stories in which some crime might have taken place, or the threat of it might be in the offing.  I soon came to enjoy these stories the most.

I am pretty sure I read all 12 stories in that magazine in one evening.  I think I did my homework that evening for Mr. Doyle, but I’m not sure.  I was so taken by EQMM. 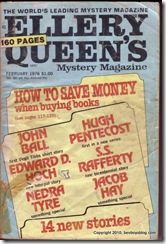 even happier when, at school the next day or the day after, a girl from my class presented me with the February 1976 issue.  Somehow, 2 issues had been mailed at once, and the wrong people had received the earlier issue.  To bring things full circle, this girl’s mother presided over my father’s funeral last month.

EQMM was a special magazine for me during those early years of my life.  I continued to buy it from time to time until my finances reached the point where I could afford to subscribe to it again, around the age of 17.   I doubt if I have thrown out an issue of it.  I loved this magazine too much!  I was even able to fill in many of the issues I had missed over the years, finding in used bookstores (for very little money) issues of EQMM from the earlier ‘70’s, and even ones from the 1960’s.

I have long since fallen out of the habit of reading EQMM each month.  But I do know that Edward D. Hoch wrote at least one story for EQMM from 1973 until his death just a couple of years ago.

You know, I have never discussed this with anyone in my life, but I will now.  I was so infatuated with this magazine and the wonderful stories it presented, that I came up with my own story.  I imagined a situation in which a condemned criminal is allowed a final meal, and he comes up with ingredients that are only available at certain times of the  year, or which are very difficult to obtain at any time of the year.  The jail is duty bound to provide him what he wants, so his execution is delayed accordingly.  I felt proud of myself.  Imagine my disappointment, when just a few months later, EQMM ran such a story!  Sigh.  I could have made a few bucks.

I am sorry to have gone on so long about this magazine, but it was a seminal influence on my life and my approach to reading fiction that I couldn’t stop myself.  Like I said at the outset: This series is probably pretty dull to the average Joe.

Next time in this series: My high school class prophecy.

I certainly remember the TV series and I have to admit I've read a few of the novels... easy, light reading ... quite enjoyable, much like your writing; never a waste of time!

I, too, loved the series and in high school some of friends called me Ellery. When the time came to write my Master's thesis, EQ seemed like an obvious choice for me -- and I still enjoy EQMM. Thanks for reminding me of all those wonderful memories.

Les, thank you as always for your fine comments. You have thousands of facebook friends, so how come you don't retweet more of my posts? :-)

Cathy, I found your thesis online last night and downloaded it. It is now a part of my dropbox folder, if that means anything to you. Any computer that I have control over can have a dropbox folder on it, which syncs up the files, which means I can read your thesis on any of these machines.

I loved reading it. I learned so much from it.

I still have nearly every issue of EQMM that I have ever acquired. I have many of the EQ novels, including some editions published during the war (buy war bonds!) like The Chinese Orange Mystery. I agree with so much of your thesis, and share your disappointment that EQ's books are seldom available. Maybe Robert Downey Jr will do an Ellery Queen movie, and people can rediscover the character all over again.

All the best to both of you. And, Cathy, keep reading... Bevboy's Blog!