Welcome to the sixth entry in the Early Bevboy.  This is the ongoing series in which I 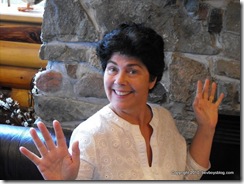 discuss, in some detail, the earlier parts of my life.  I still have no idea why anyone would give a poop about this series, as it is about as self-indulgent as any two Blue Rodeo albums put together.

You are looking at a picture of Yolande Delmar, whom I knew years ago as Yolande McDonald.  The picture was taken at about 5:15 this afternoon at Cabin Coffee in downtown Halifax.  This woman, as beautiful now as ever, was an important part of my life.  I have never discussed this before, with anyone.  It is high time I did.

I finished my degree in December of 1987.  Out of sorts, and needing a job, I was allowed to work one last co-op work term, this one with the Nova Scotia Department of Finance.  This job began in very early January of '88.  I would graduate with my degree in May.  I was 23 years old and had no money and a sizeable student loan that would soon require attention.

While I worked with Finance, it was understood that I would seek full-time employment in the city.  I dropped off my resume everywhere.  I had a few interviews.  They got me nowhere.  You know the drill.

A family friend, Peter Arnburg, worked at the client site where Yolande’s company had had a long-term working relationship.  He passed my resume to Yolande, the branch General Manager.  A few days later, she called me and arranged for an interview.

The interview was at the penthouse offices of SHL Systemhouse at 1660 Hollis Street, and I want to say it was February 19th, 1988.  So, I will.  It was a Friday.

A young lady working there offered me a coffee or tea.  I politely declined.  I wouldn’t start drinking coffee until I was 40.   When Yolande ushered me into her office, the first thing she asked was if I had been offered coffee.  I guess it was something that she wanted her staff to offer visitors.

My birthday is on February 23rd.  I’m pretty sure on that day, 4 days after the interview, I signed the contract for the company and accepted plenty of documentation about the company that extolled its virtues.  My first day would be… February 14th, 1988, once again if memory serves.

At the client site where they placed me, I learned a great deal and worked with many people who went on to be very successful in the local IT market.  I learned a lot, but not quickly.

I’ll say this about university: It’s a great place to learn the theory of whatever you’re studying, but it’s a poor environment for learning the practical, hands on work that employers want.  I struggled at things that didn’t faze other co-workers who had attended vocational schools.  Frig, it was frustrating for me, and I know it was maddening for the people I worked with, as I disappointed them over and over again.

Yolande had the option of firing me after 6 months, and I wouldn’t have blamed her if she had.  I would have been devastated, but I wouldn’t have blamed her.  I wasn’t performing at the level I was expected to.  Instead, she ensured that my work responsibilities would increase incrementally rather than be overwhelmed all at once.  It saved me, and I never looked back.

Because of Yolande, I got a second chance, and I didn’t squander it.  I remained at that client site and earned two promotions by dint of hard work.  And, it is my conceit that I earned the respect of the people I worked with.  That’s always meant a lot to me.  It’s a good thing those things happened, too, because that client site is where I met Patricia, over 20 years ago.  It’s where I met Kevin, avid Bevboy’s Blog reader, who hired me for my present job 19 years after we first met.  That building where I first worked in 1988 is the building I returned to in 2007.  And, among many other things, I got the name “Bevboy” from working there.

I owe all this, and much more, to Yolande McDonald for taking a chance on a kid who needed a job and had little practical experience, but who also had a nearly obsessive urge to please others.  These words seem hollow, and are woefully insufficient, but: Thank you, Yolande.  Thanks for being Yo, Yo.

Next in this series (and this time I mean it): My highschool class prophecy.  I just need to find some good open source OCR software.  Can you help a fella out?

Last night (for some reason) I remembered a lady I worked with years ago and decided to look her up to see what she was doing. Yolande McDonald was her name.

I also worked for SHL Systemhouse from 1984-87 and although Yolande did not hire me I remember her becoming one of the youngest, if not the youngest, General Managers around (and female to boot).

Yolande was always bright and cheerful, her mind was as quick as anyone’s I have known. I remember she could rewrite your resume in minutes and you’d hardly recognise yourself when she was done!

She was delightfully quirky too, the annual SHL Christmas Pixie Awards were named after one of her goats! Good memories.