So, the 3 kids spent hours and hours yesterday sifting through our father’s effects, deciding what to keep and what to toss and what to sell.

We discovered a number of very interesting things, such as a cheque Dad wrote to our late brother 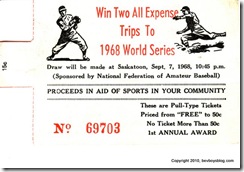 Ernest less than a month before his death, back in December of 1969.  It has Ernie’s signature on it, and I don’t remember ever seeing his signature before.  Fascinating.  Apparently, he was right handed, while the rest of us kids are left handed.

Dad had an interest in the 1968 World Series.  We found this stub for entering a contest to win tickets to the World Series.  I don’t think he won, or I would have grown up hearing about it to the point of triggering a substance abuse problem. 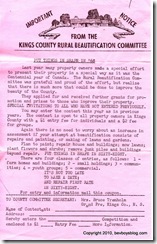 this curious effect for a beautification contest in Kings County, Nova Scotia for the year 1968.  Notice the obvious type-written ad.  I wonder if they used a mimeograph machine to make the copies?

Lastly, we found this Ode to a Teamster.  Dad had several sets of oxen (“cows” to you city dwellers) over the years, and proudly showed them off at oxpulls throughout the province.  I related the time Dad was at an oxpull in the city of Dartmouth and met the mayor, back when I presented his eulogy.  Go ahead and read it if you want to.  It’s one of the better Bevboy’s Blog posts.

The person who sent the Ode is named Karen.  Never mind the last name.  Her husband called the house a couple of months ago.  Mom took the call, and I happened to be there. 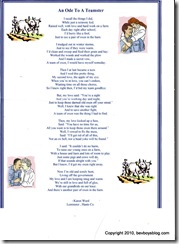 He expressed an interest in some of Dad’s things, and I asked him to hold off until we had gone further down the road of probate.  I called him back this morning and played phone tag with him until this evening.  I was speaking to him on the phone at the very moment I was scanning in the “Ode to a Teamster” document.  I told Rod that, and he was flattered.

There are other things we found yesterday, like nearly every cheque he ever wrote.  Given how hard he had to work for the money he made, I’m not surprised he kept everything.

Dad was also a sentimental old slob.  We found dozens of old birthday cards we had given him over the years, along with nearly as many bulletins for friends and relatives whose funerals he had attended over the years.  With some reluctance, those were all tossed.  Getting rid of those hurts a little bit.  I’ll be thinking about that one for a while.  Someone should start a website which displays digitized funeral bulletins.  It would be a popular site.

Dad kept an awful lot of things for a very long period of time.  Yesterday was a difficult day for us, as we waded through decades of his life and decided what to keep and what didn’t need to stay.  I hope that he’d approve of what we did, and what we’re doing as executors is what he would want us to do.  These decisions and actions are not easy to make for any of us, and more than a few tears have been shed.

Dad, there will be many more blog posts about you, and more than a few of them very soon.

I miss your calls.

Email ThisBlogThis!Share to TwitterShare to FacebookShare to Pinterest
Labels: Dad