I'm really looking forward to the long weekend.  I will go to the cottage for three days.  I haven't been there for a month or more, and I miss the place.  The last several weekends, I have been at my mother's place, cleaning out the basement.  I need a break.

I started to write this post on my new laptop, but decided instead to write it on my netbook.  My friend Kirk brought his MSI Wind netbook to Toastmasters this evening, and I felt a twinge of jealousy.  His has a bigger screen, and an actual hard drive that's about 160gb big.  This one, has a whopping 8g.  His runs XP.  I'm running a variant of linux because this computer would struggle with any version of Windows.  I put a legal version of XP on it last year, and the computer nearly died.

I still like this computer for lots of things.  Taking it to an internet cafe like the Al Whittle Theatre is a pleasure.  I see people all around me with these big ass laptops that they have to lug around from place to place.  This one easily fits into a small laptop bag that I got for 10 bucks last December. 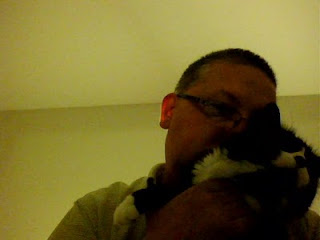 The new version of Ubuntu comes out on Sunday.  It's version 10.10, and it's released on October 10, 2010.   It promises to rethink the netbook model quite a bit, and to load much faster.  I'm hoping this means that the netbook's webcam will actually be useful to me.  When I use "cheese" to record video for me, the computer gasps and wheezes like an old man climbing a steep hill on a Monday morning.  The results are poor.  The pictures it takes are all right, but not the video.  The video sucks.  I'll include a picture here just for fun, taken on this webcam.  The pics are fine for the web, but that's about  it, and it doesn't tax the computer beyond its meager limits.

Bevboy
Posted by Bevboy at 6:12 PM