I couldn’t resist getting more pictures taken with me in this shirt and tie!!

At this evening’s Toastmasters meeting, I asked a guest to take some pictures of us, and she agreed.  She took 8 or so, and I put the best ones up on my Facebook, and the very best one, in my opinion, is on this blog post.

I had a good meeting this evening.  We had a speech and a business session and challenging table topics. 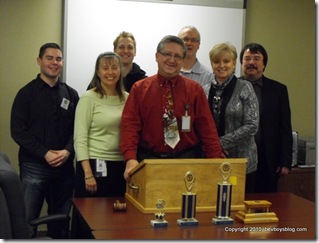 mentioned this before, but will say it again.  The lectern I’m standing behind was built by my father in 2000, months after our original club lectern mysteriously disappeared.  It still ticks me off, how we were treated by our previous hosts at the phone company.  A pox on them.  Six months after surviving an aortic dissection that year, something that kills most people nearly instantly, Dad was feeling well enough to build this lovely lectern, which we continue to use every week.

Dad was always building stuff for people.  He once built our club a fines holder, back when we collected weekly fines that is.  As a joke, or in a fit of pique, he built it in the shape of a giant, wooden tea holder.  We had a contest to name the fines holder, and we got entries from all over the world.  Remember that one, guys?  If I can find the entries, I’ll post them here.

I still have that fines holder at my desk.  It was too nice to throw out after we stopped collecting fines.  And, I also have a wooden yoke at my desk that Dad whittled for me years and years ago.  Reminds me of where I came from.  When I go, I want it buried with me.

And, on that mawkish note….

Day one of the 3rd annual Bevboy Christmas Tie Extravaganza is over.  14 or so more to go!