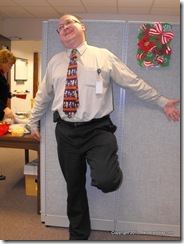 normally get to see, but that has been postponed until Monday.  I hope you’re looking forward to that event as much as I am.
Today at my work, we had a massive Christmas potluck feast, in which we brought in an awful lot of food and tried to eat it all.  This proved impossible, so there are many leftovers to be consumed tomorrow, or to be thrown at the homeless people who wander around aimlessly through downtown Halifax in a fruitless search for food.  You should see them fight over the stuff.  Such fun.
I made my world-famous chilli.  The recipe has been stolen by leading restaurants all over the world and passed off as their 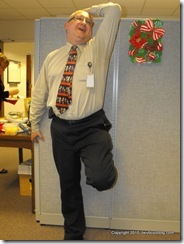 own creation, but I want Bevboy’s Blog readers to know that I created this particular variation of chilli.  Accept no substitutes.
Following my meal, I was feeling in an expansive mood, figuratively and literally.  I decided to pose in some typical beefcake stances for you, and these are the result.  My co-worker Elliott, an avid Bevboy’s Blog reader and my friend, took the pictures.  Thank you,  Elliott.
I hope you like these pictures.  I sure do.
More on Friday.
Bevboy 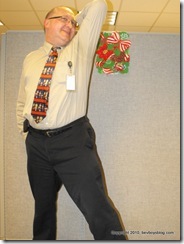 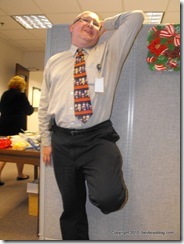 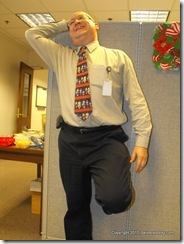 Do you want to see the whole thing animated?  Here you go!

Bevboy Dances For Your Pleasure
Posted by Bevboy at 4:24 PM