I dreamed about it last night, and awoke, with a sense of purpose.

I got up around 7:30 and walked downstairs to my home office and regarded the various pieces of pressed wood, all lying in the corner, mocking me.

I was gonna try it.

I was gonna try to assemble the pieces into a usable computer desk! 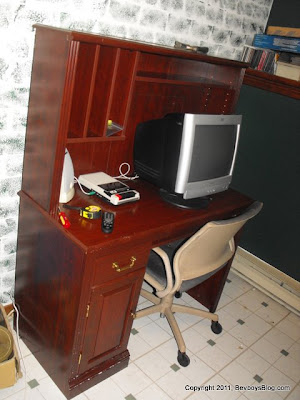 Some pieces, I didn't what the Hell they were for.  I figured I would use the pieces I did recognize and hope that the unfamiliar pieces would suggest themselves in some magical way.

The drawer was left assembled.  The inner thigh of it had the runner for the keyboard drawer.  I figured there would be a corresponding piece for the right hand side.  The long piece would be the actual desk part.  Used the side of my fist to slam them into place.

The shelf part seemed awfully short, and I had 2 unfamiliar pieces, so I figured they would extend the shelf, making it taller (there were 2 pieces of trim that slipped into place easily, too).  I was right!  But, how to affix the shelf to the desk?  I saw some holes in the desk, and corresponding holes in the pieces that made the shelf taller.  I looked in the drawer, and regarded the nails in the baggie that contained the finishing nails.  Sure enough, there were 6 longer nails in there.  Six?  But, there were only 4 holes.  What's up with that?

Hammered the shelving unit into place.  The only piece left over would seem to fit in the back, to provide additional stability.   It only fit in one way.  There were 2 corresponding holes on the other side, and sure enough, the other 2 nails would fit through the corresponding holes on the nearly-assembled unit.  I tapped those 2 nails into place, and the unit was much more stable. 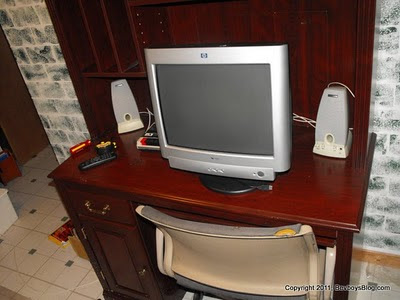 There were 2 pieces left.  The keyboard tray, which was tricky to "thread"; and the backing piece, which Patricia and I used the finishing nails to tap into place, making the unit even more stable.

So, I did the job, nearly entirely by myself.  I feel a tremendous sense of self confidence now.  I feel less like a Bevboy, and more like a ... Bevman!

You know, this nearly makes up for all the times I couldn't assemble a paper bag.  I had to get Kevin to help me assemble a vhs tape holder once.  This was a while ago, as you might imagine, as I used the phrase "vhs tape holder" in the previous sentence.

Took the time this afternoon to hook up the desktop computer again.  It is a joy to type on the keyboard; the tray is at the perfect height for comfortable typing, unlike on my first computer desk, which I'm using now.   The tower is tucked away, out of sight, inside the desk.

What's next for me?  Well, there is the thorny issue of peace in the Middle East.  I think I can take that on now.  Or, maybe, the Greek economic crisis can be looked at with a fresh pair of eyes.  Or, perhaps, just perhaps, I'll be inspired by the film Patricia and I watched this evening and build me some kind of hot tub time machine.

Bevboy
Posted by Bevboy at 6:53 PM

Congratulations Bevman!! You should be very proud of yourself (and Patricia too:)) Dad was watching you grinning and wiping the tears away with his polka dotted hankerchief. Enjoy!

Glenda, damn you, you made me cry!

I am trying to reach Barry Horne. I used to work with him at CKLW. If you can let me know where to get in touch with him it would be appreciated.