Listened to Live 105 with Cub and Floyd this morning on the way to work.  To raise money for a charity, they are agreeing to do “odd jobs” around the city.  A couple of weeks ago, Floyd had to clean out a litter box.  I do that many times a week for free.  I wish someone would pay me. 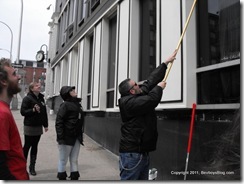 Today’s little excursion was to clean the windows at Durty Nelly’s, a downtown watering hole.  Long-time Bevboy’s Blog readers will recall that I had one of my 2010 Christmas tie photo sessions there back in December.  Go back and check by clicking on the Christmas Tie 2010 label. 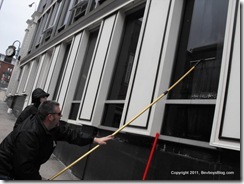 Durty Nelly’s is but 2 blocks from my work.  Patricia and I agreed to to up there and say hello to Cub and Floyd.  I’d have been delighted if they had at least recognized me.  “You’re… Ben Kennedy, right?”, was all I expected. 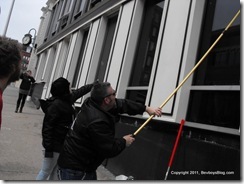 But, no.  Cub and Floyd recognized me instantly.  Cub remembered that Patricia had been too sick to meet with Cub and me when I interviewed Cub a couple of months ago and hoped that she was feeling better.

For a station that went on the air a scant six months ago, they are doing an awful lot right.  They are getting themselves into the community like few other stations do.  They are working morning, noon, and night to get the word out about this amazing radio station. 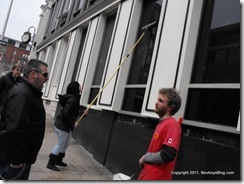 I have made it a point in the last year or so not to editorialize too much about local radio stations.  If I say something nice about radio station A, it might disappoint people at radio station B, even if such a slight was never intended.  I am trying to interview all on air staff at all radio stations in Halifax (and the Annapolis Valley), and the last thing I want to do is risk alienating folks at stations whom I haven’t yet had a chance to contact.

As I have done more of these interviews, I have come to respect and appreciate even more the hard work that jocks at all stations put in day in and day out, oftentimes for not a whole big pile of money.  The fact that they may work for a station whose music doesn’t float my boat no longer matters to me (it never should have).  These folks all have interesting stories to tell and a wealth of information they can share with the people who read the interviews.  You understand. 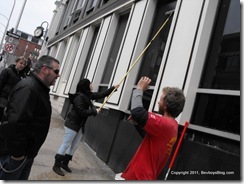 It is impossible to overlook all the hard work that the people at Live 105 have done in 6 months.  They have gone from a test broadcast to a pretty damned compelling station in short order.  I’m sure there are rough spots here and there (no news casts for the Drive show?  Tsk, tsk), and maybe one or two other things that, given enough time I could list on a piece of paper.  But, by and large, over all, generally speaking, Live 105 has been just super, and plenty of people I know have been tuning in.  People even my age. 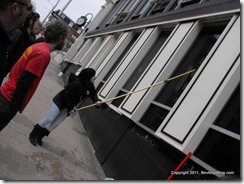 I didn’t mean to turn this blog post into an ode to LIve 105.  I do listen to most of the other stations in this market on a regular basis; but increasingly I gravitate to Live 105.  And Cub and Floyd are a big part of the reason why. 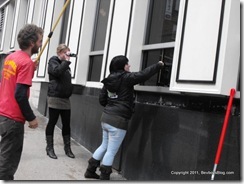 Keep up the great work, guys!