This is the first in a long-promised series about all the radios I own.

Please note:I own a lot of radios.  It is possible that, after I have taken photographs of all of the radios I have in my home and at my mother’s, that I will unearth a radio I had forgotten about.  If and when that happens, I will write about that device as well.

I write these words in my home office, on my windows-based desktop. It is just as well.  I can glance up and see one of my clock radios.  It’s the one just just above this paragraph.  With the press of a button, I can get 59 minutes of radio.  But, I don’t have to because another radio in this fairly small room is already on.  In fact, I have 4 radios in this room.  Let me tell you about them. 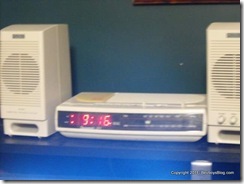 The radio above was purchased at The Value Village store in Bayers Lake, probably about 8 years ago.  I just wanted a small, cheap clock radio for this room, and this one was about 7 dollars.  It has worked perfectly all this time.  It keeps great time.  The sound quality is surprisingly good.  And it matches the 2 computer speakers flanking it.  The most unique quality is possesses, however, is the built-in night light.  There’s a little dial on the side.  I move it into the on position, and I get a variable-bright night light.  I like this radio a lot. 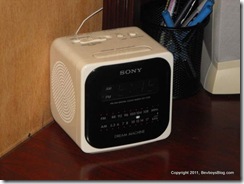 This radio is at my other computer desk, the one I got from my sister and brother-in-law this Winter, and which I had to assemble.  You may remember the blog post I wrote about it at the time.

I wanted a small radio for this space. I had another one there for a time, which I had moved to that space from an adjoining room.  I didn’t like that radio so much in practice.  It sounded fine, but the tuning bar would drift from one station to another.  A pain in the ass.

The above radio was in my living room.  Patricia found it to be in the way, so I happily brought it downstairs one evening and plugged it and put it on the computer desk, where it remains to this day.  It also sounds fine.  It occupies very little space.  And, it’s on at this very moment, tuned into CBC’s “Definitely Not The Opera”.

I got this radio at a yard sale, I’m pretty sure in the Annapolis Valley, probably 5 or 6 years ago.  I bought 2 radios that day; the other one was in poor condition and I ended up throwing it out.  This one has been a delightful addition to my radio menagerie. 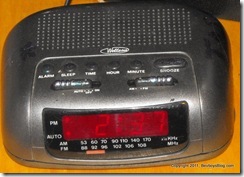 Radio #3 is a very recent addition to this room.  In fact, I just took the picture of it about 30 minutes ago.  For frig knows how long, it was at my mother’s place, in my old bedroom.  I was throwing some stuff out this Winter and found this radio.  I plugged it in to a power bar, and it worked fine.  I think I had plugged it into another outlet and found it didn’t keep time.  There is a problem with some clock radios and some power outlets.  The # of cycles that the outlet produces is something that these clock radios rely on to keep accurate time.  In some older power outlets, such as a few at my mother’s, this is a problem, and this is one of the clock radios affected by this confounding problem.

I unplugged it at the time and forgot to throw it out.  I eventually learned about this problem and decided to give the radio another chance.  It hasn’t disappointed me.  It keeps excellent time and gets good time.  I thought I’d bring it down here, and it’s plugged into an outlet at my 3rd desk.  That desk is one my father built me many years ago, and I wouldn’t part with it for the world.   It’s a one-of-a-kind item that I will tell you about sometime if you want to know about it.

I have no idea where and when I bought that radio, by the way.  If I ever remember, I will let you know.  I know you’re curious. 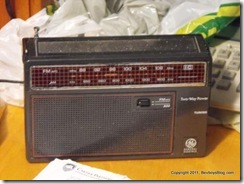 We have reached the final radio that I keep in this room.  Until I brought home radio #3, it was plugged into that outlet.  The radio is now plugged into nothing at all.  I do not use it at the moment.  I am not sure where I will put it, but I don’t plan to get rid of it, either.

I bought this radio around 2002 at a Port Williams Yard Sale.  They have these village-wide yard sales every June, around Father’s Day weekend.  I know I paid 50 cents for it.

Originally, there was the option for battery operation.  However, the previous owner had left a set of batteries in there for far too long, and the acid had compromised the wiring and injured the battery casing.  I know you can buy replacement battery casings for a dollar or so and solder the wires back into place.  But, please re-read the last sentence in the previous paragraph, the one about how much I paid for this puppy.  Any additional work done to it would be a waste of money, especially in light of the fact that the power cord makes the radio work very well indeed.

This was the radio I kept at my work for quite a few years, both at my previous job and the one I have now.  I brought the radio home a few months ago because the computer equipment at my work was interfering with the reception and caused the speaker to issue high-pitched noises from time to time.  I only kept a radio at work to distract me from all the white noise around me (you know, the humming of the lights and so on), and only at a volume that would not bother anyone around me.  I was happy to bring it back home after 9 years or so of being away.

In the meantime, please get back to me with your thoughts on this important, ground-breaking series.

Email ThisBlogThis!Share to TwitterShare to FacebookShare to Pinterest
Labels: BevBoysRadios

Wow! You sure are "radioactive" so to speak!