I had a good day at work.  But, I wanna talk about my lunch hour and the 90 or so minutes after work.

I had lunch with my friend Jeff Cogswell at the Mongolie Grill.  Coggsy is late of the Z103 morning show, but since March has been the Drive guy at Hal FM, 89.9 on the FM dial, the classic rock station that has persisted for nearly 5 years now.  Jeff is doing great at that station.  It is a pleasure to hear him on the radio.  And, it was very nice to see him again after having interviewed him in 2008.  Let’s do this again, soon, Jeff! 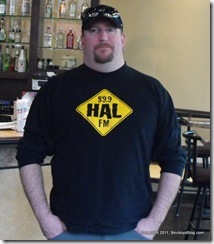 After work I hied* myself to Durty Nelly’s, also downtown.  Brad Dryden from C100 and Cub Carson from Live 105 were gonna meet me there and ply me with liquor and nachos. 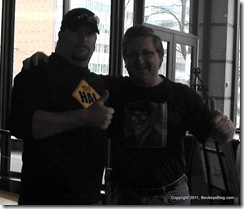 We talked about the local radio scene.  Heard lots of stories.  Brad and Cub talked about some of the guys they had worked with back in Ottawa.  In a previous life, they had done a morning show in Ottawa.  They go way back.

As you know, I have been unabashed in my liking of Live 105.  I have been a fan since they went on the air, and that enthusiasm has not diminished.  I wish the station my very best wishes. 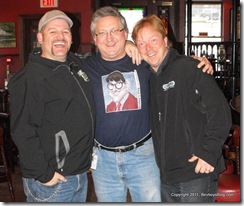 I enjoy talking about radio stuff in the same way that other folks can talk about hockey, or the way some women can talk about shoes or boys or something.   To have been able to spend parts of my day with 3 different radio guys and discuss this amazing medium is something I will not soon forget. 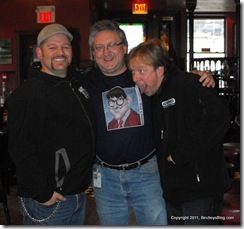 *Hie” is a very old word.  Here’s the definition.  The past tense is, indeed, hied.  It’s too bad that the spell checker with WLW doesn’t keep track of that.  Bevboy would never lead you astray.

Email ThisBlogThis!Share to TwitterShare to FacebookShare to Pinterest
Labels: radio