Welcome back to the Things in Halifax That Just Don't Make Sense series!

This very-irregularly-published series is about things in Halifax which, at first blush, may look just fine.  But, upon closer examination, they don't make sense.  They may even be stupid.

I do apologize for letting this series go dark for the last 17 months.  I did not mean for this to happen.  I will try to do more of these posts depending on Bevboy's Blog feedback.  Do let me know what you think of these posts, folks.

(You can see the former entries in this series by clicking on the "Nonsense" label that is associated with this post.) 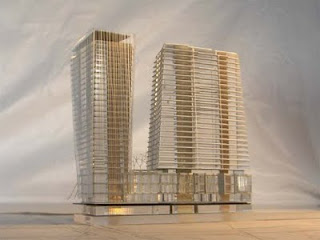 You are looking at a picture of the so-called Twisted Sisters lot, and what the proposed buildings would look like.   This lot, for many years, housed what everyone called the Tex Park, which was a Texaco service station on both the Granville Street and Hollis Street sides.  You could buy gas on either side.  I believe that you could get your car fixed as well at one point.  Above the gas stations you could park your car.

Over the years, this building became more and more decrepit.  People were leery, and rightly so, about parking their vehicles there.    When Ultramar took over Texaco years ago, there was very little improvement.  Just at first, the gas station on the Hollis Street side closed.  Then, some time later, the Granville Street side closed.  I do not recall whether the parkade area survived the deaths of the gas stations.  I do remember the convenience store on the Granville Street side, and that hookers beginning a shift would often stop off there to purchase condoms and breath mints.  I know this because... well, I just know this.

I also remember a Halifax heritage plaque on the side of the building.  I do not recall the historical significance of that site.  I am confident that one of my readers will be able to help me out.

I should write a full blog post about that section of Granville Street.  I will, one day.   I will confine my comments to the Twisted Sisters complex.

A developer decided he wanted to build two huge buildings, far larger than anything else around them, with a mixture of hotel, residential and retail on the bottom levels.   You know, probably those boutique stores that you can't afford to shop at offering products you don't need or want.  The developer expended great cost and effort tearing down the eyesore that the Tex Park had become.  He proposed the new complex.

He spent years working with the city to get approval.  Many public meetings.  Then, the local heritage advisory board stepped and complained, because, well, that's what the heritage board does.  I respect most of what these boards do, but when you're complaining about erecting two tall buildings in a spot where there is nothing more than a vacant lot, then one wonders if you're complaining about something useful, or just posturing.

After long last, after years of struggle, he was approved for development.

Nothing has happened since.

Every once in a while, you read in the paper how the developer was waiting for this, or waiting for that.  Some say he ran out of money, or interest, or is waiting for the economy to improve sufficiently to justify his expenditure.  Some say his option to develop the property has run out and he must either start from scratch or sell the property to someone and have that other person begin this Sisyphean task all over again.

The Twisted Sisters site has become a symbol for many of the things that are wrong in Halifax.  The approval process is so labyrinthine that Job himself would throw his hands in the air and shriek in frustration.   Heritage Trust of Nova Scotia plays a noble role in keeping developers honest and respectful of our history and heritage, but they and their ilk went on and on and on about it to the point where I just wanted them to shut the Hell up.  Finally, the developer chose not to exercise the option he had fought so long to attain and the site remains vacant.


Let's face it, folks.  The Twisted Sisters, and everything associated with them, just don't make sense.


Next in this series: Bridget.

no counter point here. You know this is my favourite series. I like the blend of heritage and modern aspect. Plus i dont really care about the sight line issue, it matters to me not whether you can see the harbour from citadel hill. After all, there is some homely looking buildings around there now. One of the most awesome building i've seen is in TO; One King West. Very nice remnants of an old heritage bank on the first few floors and a massive modern high rise in the middle. Pics are here: http://www.onekingwest.com/

Glad you liked the post, Kevin. More in the series will come soon.

This whole aspect of Halifax is ridiculous. I would never want to be tasked with developing anything downtown. It. Shouldn't take months to get approval let alone years. Crazy.