These humble words come to you from the town of Pictou library.  It is just past 11:20 Tuesday morning.

We don't like this library nearly as well as the one in River John.  For one thing, Margaret at the River John library gives away books she doesn't think will circulate, or thing she has duplicates of.  But, the one in River John is nowhere near a grocery store.  The grocery store we frequented there closed in 2006, and was replaced a year or two later by an ersatz used furniture store, run by the hillbilly cottage neighbour we love so much.  Needless to say, we do not shop at that store. 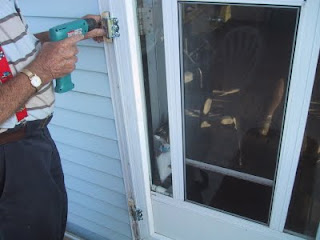 We came to Pictou because there are more services here, such as a good grocery store and several restaurants.   There is also this library, with the free internet, to which I am connected right now.

The second week of our vacation is underway, and we both regret  not having booked off for 3 weeks of holidays.  We did that one year, in 2006 me thinks, and that extra week was heavenly.   We were so relaxed after that third week that I actually didn't mind going back to work.  That was back in the halcyon days of only one cat, pre-Bevboy's Blog, pre-BlackBerry, pre multiple computers at home, pre-Newbie.   Just five years ago, but it seems like much more than that.

It was also the summer when we had my father to the cottage, if only for less than 48 hours.  He helped us do a few things around the cottage that needed doing.  Which is to say that he did them while we told him to take it easy.   That man worked until he was no longer able to, and continued to drive until he was no longer able to, which I guess is the way he wanted to go out. 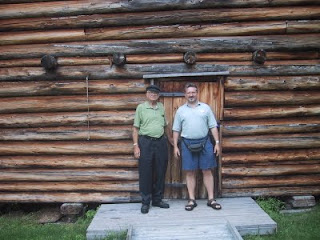 I think I have a picture or two of my Dad at the cottage.  i will try to include at least one of them with this post, just because I love you all so much.

Someone just drove up to the library, cranking Billy Joel on his car radio.  Billy Joel!  Yep.  We're in Pictou County!

As you can see, I did find those pictures of  my Dad's trip to the cottage in '06.   Thank goodness for Dropbox!   This one, with both of us, was taken in front of the entrance to the Loch Broom wooden church in Loch Broom.  Dad was fascinated by the place, having worked with wood for 40+ years.  This is the place that Patricia and I visited on August 1st 2011.  Just behind the sign posting the hours the joint is open, I stuffed a couple of Bevboy's Blog business cards.  They may still be there.  Get your rear end over there and grab 'em.  I only have so many.

The first picture was one of many, many action shots of my dad doing stuff.  The screen door had blown off its hinges during the previous Winter.  We couldn't figure out how to put it back on so it would fit, so Dad added some wooden supports by the hinges to make the door jut out just enough to enable it to close.  We found the pieces for the latch and re-attached it to the door (we used wooden screws then; in 2010, we invested in sheet metal screws, which worked much better).  He did so much more for us than that.

I have been thinking a lot about my father over the last couple of weeks.  My thoughts turn to him during wistful, vulnerable moments.  They comfort me and guide me and support me in a way that is difficult to explain to a person who has not lost a parent, but which is readily apparent to anybody who has.

I don't want to turn this post into a mawkish one.  My vacation has been restful, and my batteries are recharging nicely.  But I have had time to think, as well; and those thoughts are often about my father, and what he tried to teach me, and the things he wanted to show me.

I am sorry I wasn't a better student, Dad.  I have tried to be the best I could be.  Any failings or shortcomings are my fault and certainly not yours.

I hope you're doing well up there.

If I'm good enough, I'll be up there with you some day.

Bevboy
Posted by Bevboy at 7:50 AM