You are looking at a really grainy picture of James Randi.  We saw him tonight.  But, I'm getting ahead of my story.
I sent a Facebook friend request to an actual friend this morning.  It was a guy from my Toastmasters club whose girlfriend is also in the club.  Jesse accepted the friend request within minutes, which gave me a chance to look at his FB page. 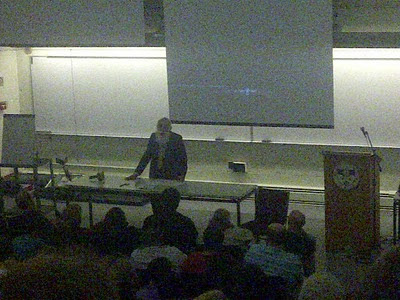 In doing so, I couldn't help but notice "The Evening with James Randi" happening this evening here in Halifax. I knew nothing about it.  Nothing.  And I was thrilled.
Who is James Randi, you ask?
Randi is a professional magician of significant talent who turned his attention to the charlatans who try to bilk money from the gullible via junk science and even magic.  The so-called "psychics" who claim to be able to tell the future or to speak with those who have passed.  The faith healers who don't heal but take your money from you.  That kind of thing.
I have several, quite a few, of Randi's books in which he debunks these people.  His book on Nostradamus should be required reading for anyone who has an interest in learning the truth about this man and how people continue to interpret his quatrains however they find it most convenient.
I'm a fan.  A big fan.
So, imagine my surprise when I learned this morning that he would be in Halifax tonight.  It would be the conclusion of a brief Canadian tour.  He would be talking about pseudo science, crap like homeopathy and chiropracty and divining rods that have cost the lives of soldiers in Afghanistan.
I had to go.
I called Patricia, who agreed to attend, despite getting over a cold.  I felt myself coming down with something but didn't want to miss Mr. Randi.
After work, we got some dinner at Boneheads on Barrington Street.  From there we drove to Saint Mary's University in order to find where the lecture would be.
We got there around 5:35; the lecture would start at 6.
The line up to get was very long, but we managed to get 2 seats side-by-side.
Randi was introduced by my friend Jesse.  Randi spoke about the things I mentioned, showed some clips of appearances on the Tonight Show with Johnny Carson, performed some of his old magic effects to make a few points, and took questions from the audience.  After 2+ hours, he was over, and we all clapped and gave him a standing ovation.
I have a couple of comments.  These psychics?  I know what they say is crap.  You do, too.  But, I think of a friend of mine from junior high who never had the chance to get an education.  Suffering from Cystic Fibrosis, he died before even hit 40.  He could never hold down a regular job, so dependent was he on the drugs that kept him alive as long as they did.  His last few years, he lived under very reduced circumstances.
I remain grateful for the day when he and I had a chat.  We talked about some of the kids who had tormented us at the school we attended together back in the day.  We mentioned some of the teachers who had looked the other way and watched these things happen.  It was a pleasant chat between two guys who hadn't seen each other in a long time, and who never saw each other again.  He died a few months later from complications of his CF.  I hope he's resting in peace.  He deserves that much, and a lot more.
Anyway, to make a few bucks for his family, he did psychic readings in the Valley at flea markets and any other place where he could get away with it.  He got a certain clientele of mostly women who wanted to hear what they wanted to hear.  Nobody was there who didn't want to be there.  I doubt if he charged much more than 10 dollars per reading.
What I'm trying to say is that there are reasons why some of these "psychics" do what they do.  And there are reasons why their clients seek their services.  It's not a black and white world.  If that small amount of money can provide comfort to a person who needs it, and that sum can buy food and help provide shelter for the person and his familiy, I am having a hard time seeing the harm that's caused by that.
Getting back to Randi, his attitude is that these charlatans are all crooks out to bilk the gullible.  He explained his position in a rational way and was often very funny.  Despite that he is 83 years old, he was spry and engaging.  Despite some recent health setbacks that he explained to us, and which I see no reason to divulge, he rambled about the lecture hall's "stage", keeping us all entertained and making us think.
I am very grateful to have had the opportunity to see James Randi this evening.  When he was in his prime, he must have been a fire cracker.  Even at 83, he remains a compelling presence.  If he comes back to Halifax, and I manage to find out about it, I will go see him.
After all, I have to see how he did those tricks.
See you tomorrow.
Bevboy
Posted by Bevboy at 6:34 PM

WOW Bev!!!! I love James Randi and I wish I could have seen him. Maybe next time?

Glad you liked the post. I have many of Randi's books. He is quite a character.

Who is this, by the way.

It's Andrew Chiasson. I'm friends with you on facebook and Twitter. I go to NSCC and I'm in RTA. I forgot to give my name. Sorry. I'm glad you had fun at the CBC Open House too. I wish my classmates and I would have been there later on. It would have been cool to meet Frank Cameron and Don Tremaine.

Hi, Andrew. Of course I know who you are. I'm glad you made it to the open house. I was coming down with my cold at the time but didn't want to miss it for the world. Been paying the price for it ever since.

Hope we can hook up some time.