I wasn’t sure how I’d be able to top seeing James Randi Friday night.  I needn’t have 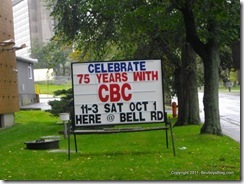 Today was the sort-of-annual CBC open house.  This year, they’re marking 75 years as an entity.

We had brunch at Michael’s on Young Street first.  Gotta put fuel in the tank, I says.  Then we hied ourselves thither to Bell Road in Halifax to find a place to park.  We eventually found one, and then made our way to the CBC tent.

We hung around there for a little while befor 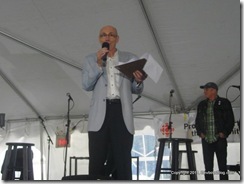 e going inside the building.  We met many of the on air staff, both radio and television.  Some of them already knew who I was once I gave them my business card.  Stan Carew smiled with delight (or maybe he had gas) when I gave him one of my cards.  Frank Cameron told me that when he was invited back to CBC radio for an interview recently, that the producer  of the show actually read my interview with him as research material.  That’s pretty cool. 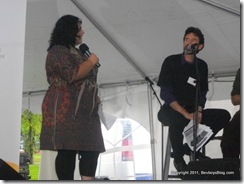 It is still a gas for me to put a face to a voice, to a name.  I had no idea what Stephanie Domet looked like for example.  Now, I do.  She’s in the picture to the left of this paragraph.

Tom Murphy and Amy Smith of CBC news remembered me from before.  Tom and I met at the Information Morning 40th anniversary shindig 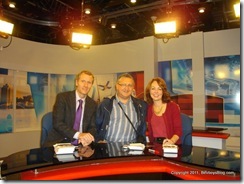 on June 4, 2010 (a Friday).  Amy noted that we were Facebook friends, which is true.  My avatar image on my business card is the same as that on my Facebook (and my Twitter, actually).

Peter Coade was kind enough to pose with me as well.  He said he wished there had been a slimming filter on the camera as we could both use one. 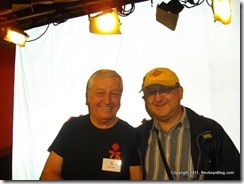 Thanks, Peter. Really.  Thanks.  Where’s my damned ice cream?

I hadn’t seen Norma Lee MacLeod in many years.  She narrated a documentary about my sister a number of years ago and ended up saying my name during it, 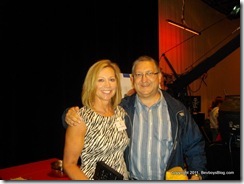 as I played a small role in that particular story.  Still, this is the first time she’d posed for a picture with me, and that was a pleasure indeed.  She said she’d seen my business card around somewhere, which was nice of her to say.

People used to ask me, back when Normal Lee was hosting the CBC news, “Do you always watch the CBC news, Bev?”  I’d say, “Well, Norma Lee I do!”  You have to read it out loud to get the effect. 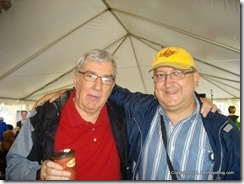 Let’s see here.  Frank Cameron remembered me.  I told you about the producer finding my interview with him.  I am not sure what to say about that.  It hasn’t been that many years since Frank left the CBC (August, 1995) and returned to private radio at the old CHNS.  Were these producers so new, so young, that they had no memory of his work at the CBC?  One wonders.

I renewed my tiny acquaintance with Don Connolly of Information Morning today. 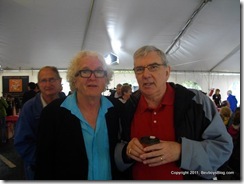 He remembered me once I gave him another one of my damned cards.  While he didn’t pose with me, due to time constraints, I did manage to get him with Frank Cameron for a moment.  Thanks, guys.  And, Don, you promised an interview with me, and I will hold you to it.

This was a pleasure, and something that I wasn’t sure would ever hapen.  When I interviewed Don Tremaine in ‘09, I was by myself.  Patricia wasn’t with me, 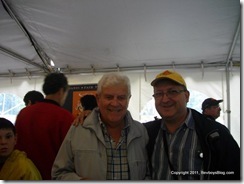 and Don’s wife was outside enjoying the fine weather while Don and I spoke in his cottage. This means that while I got plenty of pictures of him, there was no practical way to get one of the two of us together.  Because he was there today, and so was Patricia, we were able to remedy this situation.  Thanks for posing with me, Don!

Lastly, here I am with Geri 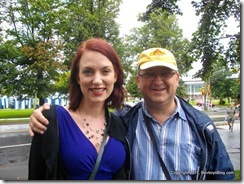 Hall of This Hour Has 22 Minutes.  It is not that I am short.  It is that she is wearing heels.  If I had been wearing her heels, I would have towered over her.  I’m just sayin’.

Turns out that they fly her into the city every week to do the show.  Otherwise, she lives somewhere in the GTA.

And, that’s it.  I had a blast today.  This was a radio fan’s dream come true.  I gave out so many of my Bevboy’s Blog business cards that I will soon have to start using the new batch I recently ordered and received.

CBC, you guys do the Lord’s work.  What you do, private radio cannot, or will not, do.  You have to keep doing it.  Without a strong CBC, our culture will change in a way that I don’t want to contemplate.   I love private radio, but I love the CBC, too.

But, you don’t need me to tell you that, do you?  After all, is there another place where you get more Halifax radio content than… Bevboy’s Blog?