Robert Maillet, star of 300, and Sherlock Holmes, and The Immortals, and so many other films, was in Hal-Con.  He was signing autographs for folks, but Shane Wilson was so moved by my interview with him that he introduced me to him.  The following was recorded for your reading pleasure. 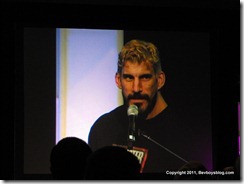 BB: I have one question for you.  It’s something I read about Bruce Lee many years ago.  He was afraid to go out socially with his friends because people always approached him and tried to pick fights.  I wonder, as a big, strapping guy like yourself, if you have ever had that problem?

RM: I never had an issue.  I did work as a doorman, so sometimes.

RM: Yes.  That’s different.  But, normally, no.  They approach me, and buy me beer.  They want to be 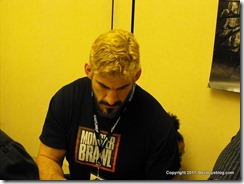 BB: They never try to pick a fight with you.

RM: No.  Nobody’s tried to pick a fight with me.  I don’t have the attitude of fighting somebody.  I treat people pretty good.  So far, so good.  No fights.

BB: I hope you’re having fun at Hal-Con.

BB: Excellent.  Thank you very much!