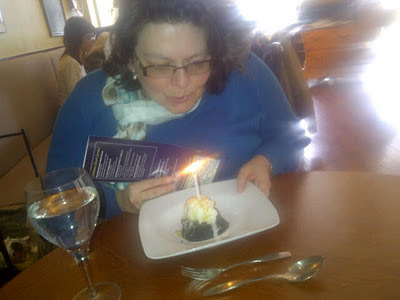 Here is Patricia blowing out a candle on her dessert following a wonderful lunch at Acton's Cafe in downtown Wolfville, earlier today.
We got up around 8 and drove down there around 8:30.   We went to get some cash and then to the farmer's market.  I bought a scone.  It had a hair in it, and the girl I bought it from gave me my money back and offered me another scone. I opted for a macaroon instead.
Afterward we walked to the Wolfville Animal Hospital to take a look at the cats.  This is where something neat happened.  Patricia was looking at some cats in a cage.  A woman wanted to get past her and excusted herself as she did so.  Patricia looked up and called out a name, and the woman turned around and regarded her.  Turns out that she, and her daughter, lived across the street from us.  Patricia had befriended her last year.  They had moved away without telling her, ending up in Wolfville.
We had ended up there on the spur of the moment.  So had they.  Through pure happenstance, they ran into each other.  What were the odds?
They talked for quite some time.  We all left together and ended up at EOS Fine Foods.   We stayed for a few minutes before taking our leave.  I gave each of them a business card, and they promised to keep in touch.
We made our way to the main street; we still had 30 minutes to kill before lunch.   We went to the used bookstore on Main Street, Rainbow's End.  The owner had been at Hal-Con the previous weekend, and we talked about that.  I got a book and then it was time to go to Acton's.

I grew up there, but I had never set foot in the place before.  It was wonderful.  I had a salmon dish with a nice salad; Patricia had a seafood hot pot.  We both had dessert, which is why you see that picture of Patricia up there.

After lunch, we wandered around town for another 90 minutes or so, spending time in the New bookstore the Box of Delights.  I tried on Winter boots and heard that Jason Priestley shopped there on a regular basis.  We checked out some other stores in that beautiful town before going to my mother's for a few hours.

Of course, my mother had prepared 2 shopping lists for us.  We went to New Minas to get those groceries.  Behind me at the check out was none other than MP Scott Brison.  I learned something about Scott Brison: He owns jeans.  He was wearing a pair today.  Of course, I gave him a blog business card and he agreed to an interview sometime.   I get that a lot.

We returned to Mom's and watched the evening news before going back to Wolfville.  We got some  hot chocolate at Just Us!  We got some pumpkins and fruit at a stand just off the highway.  And we returned here, arriving around 9:30.

It's been a very  long day, rich with incident.  Tomorrow is her actual birthday, but it was celebrated today.  Tomorrow will feel anticlimactic.