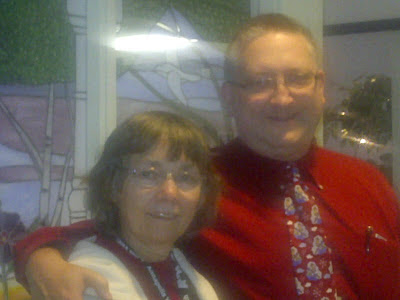 More to come, on this special bonus edition of the Christmas Tie Extravaganza!

This is a minister named Barbara Durling whom we ran into at the hospital. I gave her several Blog business cards. She promised to check out the blog.  She's a religious person, so I trust her word.

I apologize for the quality of this picture.  It came from my BlackBerry, and was taken in front of a stained glass window.  Poor combination, I guess.  Barbara deserves to be in a better picture, especially one with Bevboy.  Perhaps we can do this again sometime, Reverend Durling?

More pictures were taken today. They will be added to this post, later. Watch for them.

We're now back in the city, so I can fill you in on the details of our Valley trip pictures! 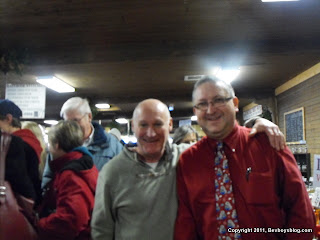 This morning, when we drove up from the city, we decided to check out the Wolfville  Farmer's Market. We love it there.  It is just the right size for a Farmer's Market.  Yeah, there are huge ones in Halifax, but so what?  A lot of the vendors who go to Seaport or the Historic Farmer's Market come from the Valley anyway.  Why not just go to the source?

We wandered around.  We saw Pete Luckett, who never saw a camera he didn't like.  We asked him if he'd pose with me, and he agreed.  Of course, the ice wine that Patricia bought from his vineyards didn't hurt with his decision. 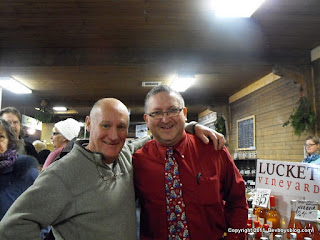 Pete was kind enough to pose with me in two pictures.  Thank you very much.

Later on, late in the afternoon, after the picture with the minister, we went to my mother's house and decorated her tree.  Afterward, proud of the work, Patricia got these 2 pictures of me by the tree.

It was a whirlwind trip to the Valley with little time to do anything else than the things on our list, which was lengthy.  It is now just shy of 10pm, and I think I will call it a night. 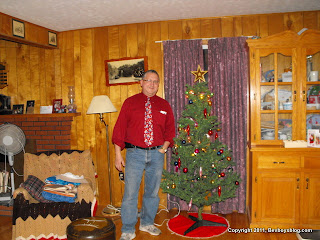 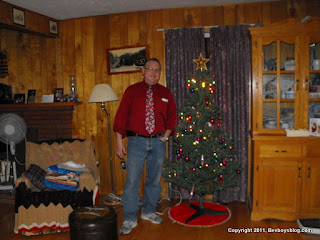 Email ThisBlogThis!Share to TwitterShare to FacebookShare to Pinterest
Labels: Christmas_2011