And, here we are, barely a month after the previous entry in this series.

This series, which has all the regularity of a guy who eats cheese for a living, is about my early life, up to about the age of 25 or so.  I write about this early period of my life to help me remember those early years, whether I want to or not.

This evening's entry is about my first bicycle.  Actually, my second bicycle.  Keep reading. 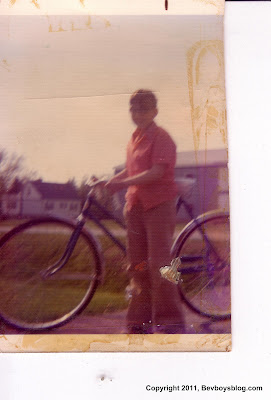 As you can see, I am very young on this bike.  I am in my parents' drive way.  The neighbour's house is across the street; he would one day teach me to drive, and I wonder where his front door is in that picture.  This picture was taken when I was around 9, which would have been 1973.   But, I remember another bike, which I used to ride to my elementary school, by myself, at the age of 8, to get that bike inspected.  My parents lived, and my mother still lives, in an area that is not close to any school.  In order to get to my school, any school that I ever attended, I had to take the bus, or be driven, or ride a bike.  Having a bike was important.

So, I went to that school on that bike.  It was pronounced to be in decent shape.  I drove it back home, on Sutton Road and was barely able to stop it in time when it became necessary to do so.

I needed a newer bike, one with decent brakes.

My parents decided to get me a girl's bike.  Cross bars are evil things for boys, ladies and gentlemen, especially when the bicycle is too big for you to begin with.  To get around this problem, and to make the bike last longer so that I wouldn't grow out of it sooner, they got me a girls' bike.  So, that's me standing with my bike, which was for a girl, and I had a girl's name to begin with.  Identity issues much?

I had learned, poorly, to drive a bike with the training wheels off the previous year.  There was just enough of a slope in the drive way to allow for me to coast and drive and do that safely.  The training wheels came off, and I fell off the bike a few times and now I can't imagine how it's possible to forget how to ride a bike.

This new one, the girls' bike, was far too big for me.  The seat was up around the small of my back.  When I was on the bike, my feet never touched the ground.  It seemed like I was riding one of those Penny Farthing bicycles rather than a traditional one.  I had more than a few mishaps.

A couple of times, I drove that bicycle into a ditch.  I just couldn't figure out how to do turns sharp enough to negotiate the turn into my parents' drive way.

Another time, I was driving down the road from my parents' place.  There was no traffic behind me.  I decided to do a U turn.  I misjudged the turn.  Instead of going back to where I came from, I was going into a much deeper ditch, with rocks in it, than the other ones had been.  My life flashed before me.  I was 9, so it didn't take long.  The ditch yawned open before me, as if welcoming me.  At the last possible second, the front tire found purchase on a small ledge of sediment, and I was able to negotiate that turn.  It was the closest I ever came to serious injury up to that point.

(It was two more years before I was hit by a car, but that is a tale for another time.)

After that little incident with the ditch, I felt I could do no wrong, and I seldom did.  I had got the hang of riding that bike.  I couldn't drive it without my hands on the handle bars like other guys could on their bikes, but I could drive it really fast, at least as fast as little kid could drive his bike.  I took it everywhere.  The fact that it had no crossbar gave me some individuality back when I didn't care what others thought of me.  That a boy was driving a girl's bike didn't bother me, and I'm not sure it would now.

I kept that bike for.. I dunno.  Two years?  Three?  I went through another bike, and the derailer fell off that one when I was driving it home from a late night baseball game.  That bike was replaced by yet another one that I drove for several years and may have been the last bike I drove for a very long time, because I got my driver's license when I was 16.

I seldom ride a bike any more.  The closest would be the spin classes I used to do, but which I have been neglecting shamefully since my father died.  But now you know that my bike riding goes back many, many years, and some of the times I nearly got killed riding them.

Next time in this series: The first time I ever won something off the radio.

Bevboy
Posted by Bevboy at 4:16 PM