I should have written this post before the holidays, when these marvelous digital images were emailed to me.  I am sorry about that.

This is my fourth or fifth email about Norm "Pearshape" Riley, the seminal Halifax radio broadcaster from the late 1940's.

This has been a rocky road for me.  I will tell you how I got on that road.

Back in the year 2000, Patricia and I attended the memorial to the Capitol Theatre, which was in Maritime Centre in downtown Halifax, which building now occupies the space where the theatre had been.  Back then, it had been 25 years since the theatre had been torn down, and there was a new book to celebrate this old movie palace.

We wandered through the display, fascinated by this piece of Halifax history unknown to us.  My eyes alighted on the following caricature: 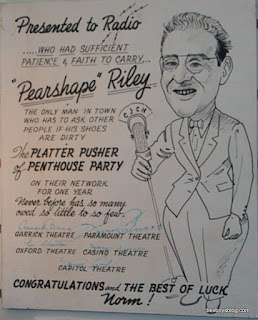 Why was there a picture for this radio guy whom I'd never heard of, here, signed by these folks who owned or managed a bunch of other movie theatres that no longer existed?

I got a little closer and noticed the CJCH letters on the mic label.  Apparently this man named Norm Riley, nicknamed "Pearshape Riley" because he wasn't a svelte man, had worked for this station.  I remarked as such to an older woman standing next to me, who smiled, and responded that she fondly recalled listening to him on CJCH back in the day. 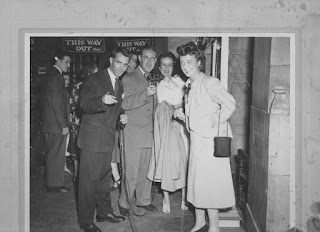 I had to know more about this man!  Current jocks like JC Douglas doubted Norm's very existence.  Another guy, not in radio, was convinced that Norm Riley was in fact Norm Perry, a much-later broadcaster better known as having hosted Canada AM for several years, a long time ago.  No matter what I told him, I couldn't convince him otherwise.  Maybe I can, now.

Over the years, I'd learn little dribs and drabs.  I'm sorry to report that much of what I heard about Norm Riley wasn't positive.  Of course, even more recently, thanks to these photographs, much of what I've heard has now been successfully contradicted in my mind, which puzzles me all the more, frankly.  Why were people so hard on Norm Riley? 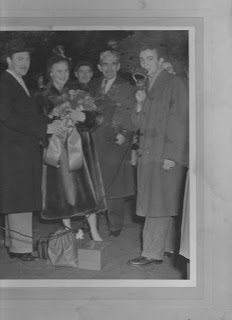 First of all, in these pictures, Norm doesn't look that fat.  I would describe him as quite slim in some of these pictures, to be honest with you.  Why the disparaging nickname, then?  I do not understand.  Was there some professional jealousy at play?  After all, Norm Riley's ratings were through the roof, apparently. 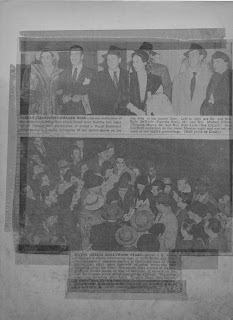 Second of all, Don Tremaine told me in 2009 that Norm Riley was kept behind the scenes, out of the public, because his physical appearance did not match the perception people (mostly young women) had of him.  They heard his wonderful voice -- which I have never heard of course as he left town many years before I was born and died when I was five -- and imagined him to be some physical specimen that he was not.  Once again, in these photographs, I cannot say he was a homely man.  Not an Adonis like me, of course, but not a bad looking man at all.

If anything, these pictures of Norm Riley show off a playful side that I find charming.  Dressed as a maid for a woman who won a "Maid for a Day" contest on CJCH in 1948 or so, he is kidding around with the man he is there with in a way I find amusing as he doggedly tries to clean the woman's carpet.  Who is that fella, anyway?  I have a larger version of the newspaper clipping.  By zooming in and squinting at the fine type, I can see it is Harry Norris.  Because of Halifax civic addressing changes over the years, I do not know if the buidling still exists where Norm played maid for that day.  Does anyone reading this know about how the new civic numbers correspond to the old ones? 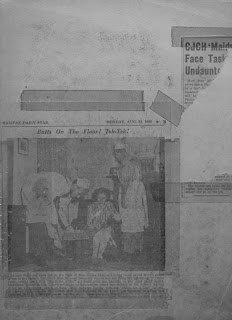 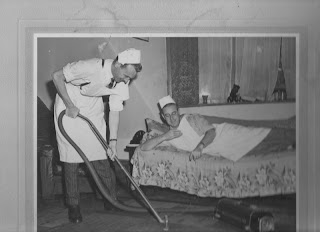 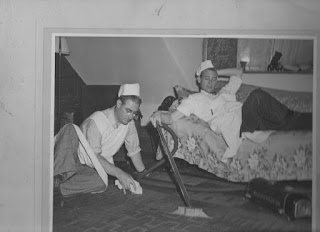 Norm is visiting local schools.  He is interviewing Miss Canada 1948.  Our man got around! 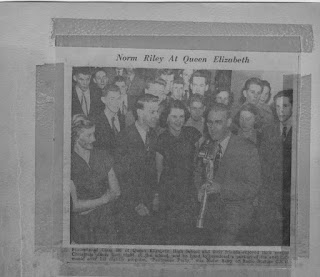 I had heard that Ronald Reagan was in Halifax during the late 1940's.  Reagan, while President, once met some children from Halifax and mentioned he had been here once, after the War, to visit his first wife, Jane Wyman,  who did a movie here called "Johnny Belinda".  I am guessing while visiting her  here, Norm ran into him and said hello, presumably at the airport in the West  end of the city, the airport that has not been there for a long, long time.  The timeline fits, as Norm was working at CJCH back then, as evidenced by the dates on some of the clippings in this post. 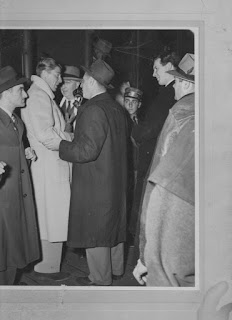 Norm is front and centre in an early photograph featuring many other 1940's-era radio broadcasters.  I had heard much about Don Loughnane.  Now I know what he looked like as a young man.  In the picture as well is a very young Clive Schaefer.  Clive at some point was Norm's co-host at CJCH; maybe they were at this point.  I don't know, but want to find out. 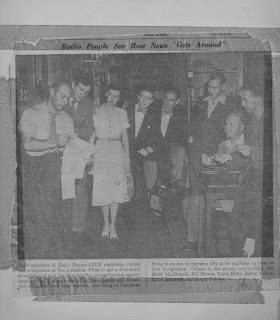 I do not know when Norm Riley left Halifax.  I just know, from the original caricature, that when he left town, he was feted by many local movie theatre owners.  I know from other reading that he owned a record store on Spring Garden Road.  He was a manager of  yet another movie theatre.  He managed Hank Snow for a time, and that relationship ended badly, apparently.

I must thank Norm Riley's grand daughter, Rachel McCormick, her brother Mike, and Norm's son, for taking the time to write me and tell me about their grandfather and father, and for sending along these amazing pictures.  Trust me when I tell you, and them, that I want to know more and more about him.   I feel I am just scratching the surface.

To Norm's family: Thank you for giving me a chance to tell part of his story.  I would be delighted to interview any of you, all of you, and learn more about Norm Riley!

Bevboy
Posted by Bevboy at 5:48 PM