Canadian radio folks have a website to go to when they want their radio news or to hear, officially, of a job  opportunity somewhere.  It is called The Milkman.  I do not understand why it's called that, but here's the website.

In it, I have learned all kinds of things.  Who's been hired.  Who's been fired.  Radio station format changes.  My recent favourite story was the radio station in Calgary that decided to fire every one of its on air staff and replace them with new folks they were hoping to hire from ads in The Milkman.  The new station would be called Up! 97.7.  I don't think it was a very "up" day for the poor sods who lost their jobs that day.  But that's the way the radio medium works.  And I'm digressing again.

You can imagine my surprise when, 10 days ago, I went to The Milkman and saw that Cub Carson, who has been with Halifax's Live 105 since they went on the air in October of 2010, was going to leave that fine station and return to Ottawa, where his many fans have missed him, where much of his family is.  His first day at Bob FM in Ottawa will be February 13th, a scant 4 days from now.

I wrote Cub, and he confirmed it.  He was told to keep it fairly quiet until his last day at Live 105, which is Friday the 10th.  I have respected that wish and not written about it until now.

Live 105's former PD, Rob Johnson, actually told Cub and Floyd that there was a guy in Halifax named Bevboy who would contact them both for an interview.  Rob assured them that I was harmless and meant no ill will to them.  I hereby thank Rob Johnson for paving the way for me!

When Cub and I met for lunch at The Pogue Fado in early 2011, he was friendly and gregarious and fulsome as he regaled me with his radio stories.  He treated me as if we were old friends instead of the merest of acquaintances, and I will never forget his kindness to me.  Most of those stories are in the published interview, which you can find easily by tracing your mouse down the right hand part of the screen and clicking on the Cub Carson label.

A few months later, Patricia and I ran into Cub and Floyd as they were cleaning windows outside Durty Nelly's in downtown Halifax.  Cub was a gentleman with Patricia, and she never forgot that. 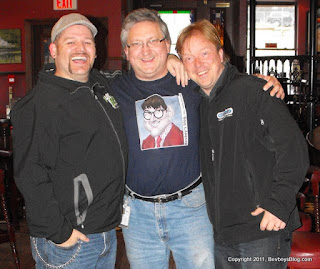 Not long after that, Brad Dryden from C100 invited me to Durty Nelly's for some appetizers as a way to thank me for something I had done for him.  He promised that Cub would be there as well.  They are old friends, you see, who worked together for a time in Ottawa.   They posed for a couple of pictures with me.  I will try to include one with this blog post.

Cub Carson has been the driving force behind the success of Live 105.  He took a station that interested me from and for Day One, and made me come back for Day Two and Three and a whole lot of days that followed.  Halifax radio won't be the same without Cub Carson.  I will miss him a lot.

(Of course, Floyd and Christina  and Scotty Mars and JD Desrosiers all played a strong role in getting the station off the air as well; not taking anything away from them.  New hires Neil Spence (I'd kill to have a voice like his!), Morgan and Dexter have done a great job delivering the Live sound.)

I will come out and state now that, of all the private radio stations in Halifax, I listen to Live 105 the most, by a wide margin.  Cub has been a big part of the reason why.  Honestly, ladies and gentlemen, if you don't listen to Live 105, then give it a try.  Even though Cub is leaving, it will still be around and still be terrific.  His successor is my friend Jeff Cogswell, and you will love him, too.  Here's the link to their website.

Cub,  thank you for your service to Halifax radio over the last 15 months.  You have made me laugh and cringe at some of the "Which One and Why" questions, and because of my participation in that contest last year, I won the biggest prize I have ever won on the radio.   I wish you and yours all the best in your future career.

Who knows?  Maybe you'll want to come back here some day.  We'd all love that.

A Bevboy can always hope, can't he?

Bevboy
Posted by Bevboy at 6:02 PM