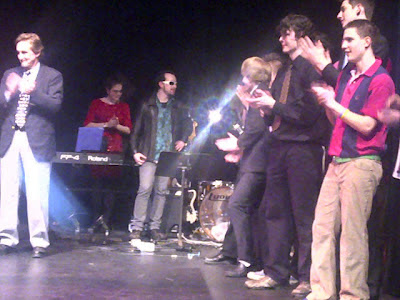 I'm back to my mother's on a stormy Saturday night. I was out most of the evening at the Al Whittle Theatre in Wolfville to see the musical Jump.

I really liked it. It was a high school show that featured tons of pop songs from the 1980's. Much of the acting was good. The singing was inconsistent but the girls seemed to be better.

The production was marred by some mistakes that were hard to overlook. More than a few times, people who were micced were cut off as they sang. Voices dropped in and out. Disappointing.

My friend Neil Spence played bass guitar as part of the production's house band. He was great. He's in the accompanying picture.

I really enjoyed Jump. I wish I had gone other years. If it's back next year, I'd like to go. Maybe I'll take you if you're nice to me.

From Bevboy's BlackBerry to BevBoy's Blog!