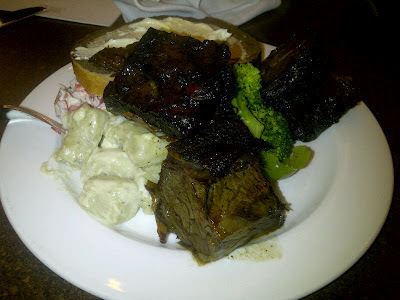 I was on an Oracle overview course all day, downtown.  Usually at these things, you are lucky if they give you 3 day-old sandwiches somebody found in a dumpster and dusted off and presented to you for your eating pleasure.   If they have cookies, they are the kind that bakeries sell on a given day because if they don't sell them that day, then they cannot be sold at all.  The coffee is the kind of coffee that you wouldn't want to ingest for fear of what it will do to your gastro-intestinal system.

When I got there this morning, they had juice.  They had really good coffee and muffins and other things.  I saw cereals.  Cereal.  Corn flakes!  Count Chocula.  Whatever it was, it was cereal.  I don't have that stuff at home!

The lunch was served around 11:15, so that we could reconvene the session at noon sharp.  In the above picture, those are cubes of roast beef.  Underneath is some kind of potatoes stuffed with what may be cheese.  They had steamed veggies.  All manner of bread.  Some kind of lobster-based side dish.

There was soup, chicken with 7 types of rice.  I didn't count them  all.  I saw the sign next to the soup and took their word for it.  Sometimes, you just have to do that.  Know what I mean?

I decided to load up a second plate but only managed to eat about half of it.  Eyes bigger than belly syndrome affected me.

The afternoon was all about staying awake after all those carbs and all that meat.  We finished the session around 2:15 and walked to the car that would transport us to work.

The rest of the afternoon was full of regret over having eaten so much.  I know other guys ate as much as I did, and probably more, but I am not responsible for them.  I am only responsible for myself.  I hate it when people get more food than I do.

I went to TM after work, and it was a good meeting.  Of course, the day after Valentine's, there was left over candy.  More damned food.  Was Bev-Girl trying to kill me?  What did I do to her?

Patricia and I met where I told her my car was.  I got there by rolling down the hill and hanging a right on Granville and stopping when I reached the legislature.  On the way here, she got something to eat at Planet Organic on Quinpool.

Frig, I can't even look at food right now, so I left Patricia upstairs and came down here while she ate her dinner.  It is an hour later, and I will shortly move my bloated carcass upstairs and go to bed, sleeping off all the victuals I consumed today.

The moral of the story is, there will always be more food for another meal, so don't stuff yourself at any one sitting.  Nothing good can come from it.

When can I go on that kind of course again?  After all, tomorrow is another day.

Bevboy
Posted by Bevboy at 5:09 PM