Welcome to my weekend, folks! 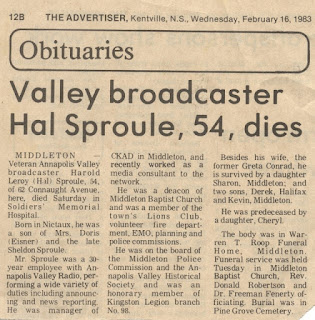 You are looking at a jpeg image of the obituary of Annapolis Valley Radio broadcaster Hal Sproule.  As you can see, it is from early 1983.  I would have clipped it from the paper back in the day.  I recently found the obit in a scrapbook and scanned it into my computer.

I don't know much about Hal Sproule.  I do recall he pronounced his last name on air so that it would rhyme with the name of his show, called "Hal's Corral".  I remember that he left the air for a time only to return.  Then, he died.

I have one other memory of Hal Sproule, and it is possible that I am mis-attributing it to another AVR broadcaster.  Some of you older folks may remember "Kung Fu Fighting", a 1974 hit by one-hit wonder Carl Douglas.   You can find the original video/song on Youtube.  It is far too cheesy to run here (I do have some standards), so I will run the Cee Lo Green version below:


(How cheesy is the original version?  As cheesy as the cheese on sale at Superstore the week before Christmas.  Yeah.  That cheesy!)

Anyway, Hal Sproule/whoever was playing "Kung Fu Fighting" one morning and back sold it when it was over.  So smitten with the song was he, that he picked up the needle and dropped it again on the latter part of the song, replaying that portion of it.

I used to think it was a dumb thing to do, but if it has stayed in my brain for the better part of 40 years now, it may have been one of the smartest things I have ever heard on the radio.  And, I am pretty sure it was Hal Sproule who did this, all  those years ago!

I am going to link this blog post to that FB group in the hope that people reading it will have some comments to make about this veteran broadcaster, either as direct comments to the post, or on the FB group.

What are your memories of Hal Sproule?

Bevboy
Posted by Bevboy at 7:51 AM