I was feeling well enough to drive to the Valley on the weekend to participate in my mother's birthday.  I wouldn't have missed it for the world.  The whole family would be there. 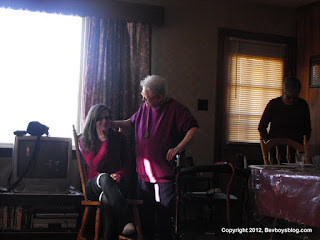 Well, except Dad, of course.  But we like to think he was there in spirit.

I had agreed to make dinner.  I threw a slab of beef in the crock pot I bought Mom several years ago along with some secret ingredients.

Of course, being a Saturday, my mother had many plans for me that involved me taking her shopping for a long period of time.  We did that, hitting Wolfville and New Minas so hard they didn't know what hit them.

We returned to the house and I collapsed on my old bed, a quivering mess.  Mom felt fine, of course.

By 3pm, I got up again to return to dinner preparation.  Fearful there wouldn't be enough beef to go around, and aware that at least one family member doesn't care for beef, I decided to cook some chicken legs as well.   I peeled some potatoes and cooked those so that we could all have some mashed potatoes, too. 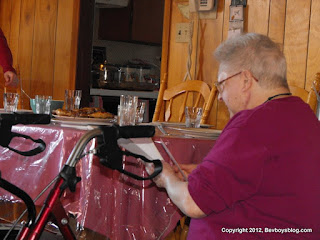 Dinner was ready by 4:45 or so, and we ate around 5pm.  They got me to sit at the head of the table, where Dad always sat.  My niece Maggie sat in the chair I occupied for many, many years.  It felt a little awkward, sitting in Dad's place. 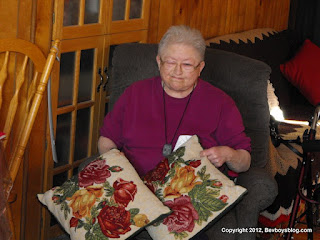 Mom got some throw cushions for her birthday and a new footstool and a giftcard for Cora's, a place I introduced her to a few months ago, and a place she goes on and on about as being the best place in the world to get breakfast.  I got her the dinner I prepared, plus took her to the afore-mentioned Cora's, and a gift card to put toward groceries. 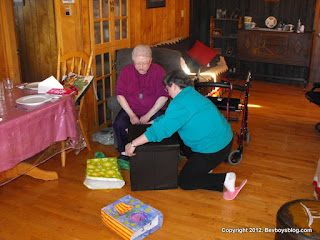 After the dinner came the dish washing.   I dried a few, but the bulk was washed and dried by the sisters, out of respect for my having prepared the food.  Since I prefer cooking to washing the dishes, I may do more cooking for people.

An hour or so later, they left, leaving me alone with my mother.  She remarked how she didn't feel any older.  What she didn't say, because she didn't have to, because it is a subtext to everything we do as a family now, is how much she missed Dad.   We all miss him.  He remains a presence in the house. 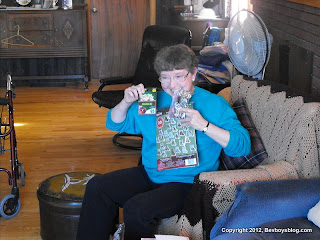 I returned to the city on Sunday after taking my mother to breakfast at... Cora's!  I swear, if that place didn't exist, we would have to invent it for her. 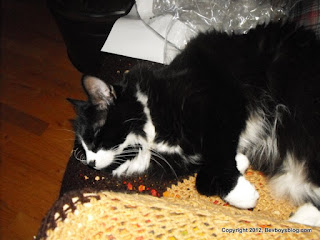 Mom, I don't say it enough, and I certainly don't say it enough her, so I will state it now: I love you.  I have not always agreed with you in the way that  you have not always agreed with me, but we are more alike than we are different.  We are both homebodies who would prefer to stay home doing stuff than go out and do stuff.   People either understand that or they don't.   You have lived in the house that Dad built for more than 50 years, and you can damn well keep living there for another 50 if you want to.  I will keep that house together through sheer force of will if I have to, in order to let that happen.  If that's what you want, that's what I want.  If it means I have to drive up every week or two for the next X number of years to keep the lawn mowed and the house painted and blah blah blah, then that's what I will do.  Period.

What else are sons for?

Bevboy
Posted by Bevboy at 5:48 PM