You are looking at a picture of me with Old Man Luedecke, taken during the intermission of his concert on  April 29, 2012 at St. Luke's United Church in Upper Tantallon.  He's only 36, folks!  I'm the actual old man in the picture! 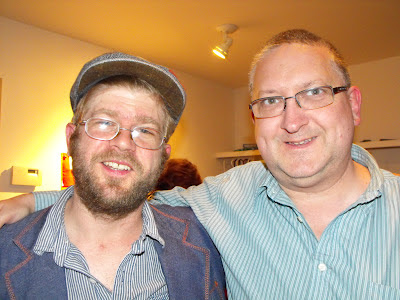 Old Man Luedecke is an old soul playing music you wouldn't expect someone his age to play, using an instrument you wouldn't expect him to employ, a 5 string banjo.  His music is soulful and beautiful and lyrical.  I loved it.  I especially loved how he decided to stand up and play last night.  Usually, he sits down while he plays, stamping one foot as he goes along.

It's just him and his banjo, and sometimes his guitar, strumming and picking and grinning, as he sings songs about the human condition, about love, and life and death.

Up until last evening, I was a casual fan of his music.  The last time I saw him was on my birthday in 2011, when he did a free concert at the Grand Parade.  I didn't like it that much that evening.  His music is so intimate that it's hard to share it with thousands of other people.  Plus, it didn't mesh well with the stylings of The Stanfields, who had played earlier.

I hadn't given Old Man Luedecke a proper chance, based upon seeing him last year, and for that, I feel badly.  I was dismissive of his obvious talent.  I'm sorry.  However, I loved his performance last night, there in that church, with 250 or so other people.  His music carried me away with him, and I enjoyed every minute of it.  I can't wait to see him again.

Please, folks, if you get a chance to see Old Man Luedecke, especially in a smaller, more intimate setting, get yourself to that location with great haste and do so.  You won't regret it.

Here's a song he didn't do last night, unless he did an encore, which we missed.  "I Quit My Job".

Email ThisBlogThis!Share to TwitterShare to FacebookShare to Pinterest
Labels: OldManLuedecke