Welcome to 1999, ladies and gentlemen!

A bit of housecleaning.  I forgot to put an actual title for post 1998.  Why not suggest one?  I will come up with a prize of some kind.

1999 was another year in which I walked to work every day and made fun of the people who had to commute by car or bus.  I enjoyed it very much.

1999 was my first year at the government department I joined in 1998.  In that year I began to do some freelance work for my previous department in preparation of Y2K.

Remember Y2K?  It was deeply misunderstood by people at the time who had no idea what they were talking about.  Or, maybe they understood it perfectly and simply chose to push the panic button because it served their interests.  Pick one.

By way of background, I had bought my first computer in the mid 1980's.  It was a Color Computer 2 from Radio Shack.  No hard drive.  No floppy drive.  Programs were saved and loaded via cassette tape.  I had to buy a special cassette player that was more compatible with the machine.  I still have that cassette player, which I bought on December 31, 1984.  Use it for digitzing the contents of cassettes.  But I digress.

In 1985, I bought my first floppy drive based computer, an original Osborne machine, used.  Cost me 800 dollars or thereabouts; I bought it from one of my professors.  It was called a laptop computer, but that would be like saying that people place sewing machines on their laps while they're working, because that's how big and heavy the computer was.

Here's a picture of one: 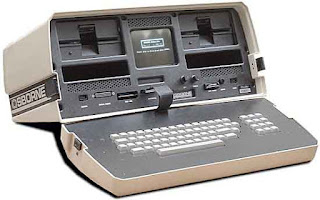 The computer had 2 floppy drives, 5.25 inches in size, and were single density, holding 180kb of data each.  Not gigabytes.  Not megabytes.  Kilobytes.  A 180gb hard drive today would be on the small side for most people.  These floppy drives each held one one-millionth as much information.

Back then, and for years before and several years after, if you had a database, you had to conserve space wherever you could, because drive space was not just expensive, it was nearly unattainable above a certain threshold.  Hard drives were maybe 10 megabytes, 20 if you were showing off and had to have the very latest.  The concept of database normalization was born of necessity: Reduce redundancy, reduce space, reduce data storage costs.

In order to realize additional storage cost savings, the century was often not specified in a date field.  It was always assumed to be '19'.  So, a birthdate might be stored as '790215' rather than '19790215'.  Those 2 bits, multiplied by all the instances where a date would be required, would realize real savings.

Come the late 1990's, many of these legacy systems were still out there, because they still worked and there was no need to change something that was still working.  These missing century dates would cause a problem, in theory for calculated things like people's ages, once the date flipped to January 1, 2000 (20000101 - 790215 = some bloke who's 19 209 886 days old).  This created a massive hysteria with people who shrieked that planes would fall from the sky, people would no longer receive their old age pension cheques, and suffer severe erectile disfunction.

Across the world, and across my part of the world, Y2K initiatives were launched to make sure that these legacy systems would continue to work post January 1st, 2000.  I found one or two instances were code had to be remediated on the system I was maintaining.  I also did this freelance work for my previous department, working nights and weekends.

Much of what I remember about 1999, therefore, revolved around work, both at my then-current employer, and my previous one.  I had thought that my work would be recognized come December 31, 1999.  I was mistaken.  The boss who had cautioned me about my freelance work instead chose to work the overtime that evening heading into January 1st.  The people making that supreme sacrifice were paid a handsome overtime cheque plus were provided with snacks throughout the evening.  Bevboy was shut out.

The Y2K incident only reinforced my perceptions about the department I was now working for.  Very clique-y.  Also, come the end of the year, I was pretty burned out.  There was not much time for fun for me that year.

Toastmaster kept chugging along.  It was our first year as an amalgamated club.  As is usual in any volunteer organization, there was a lot of turnover of membership.  One guy in particular was named Graham Wyer.  An excellent member and a great guy.  He moved to Ottawa and I haven't seen him since.  Nature of the beast.  I still wonder what he's up to and hope he and his wife are doing well.  Maybe I will try to look him up on Facebook.

1999 was a year of work for me, of some frustration on a personal as well as a professional level.  It proved to be a prelude to the year 2000, in which I made some big mistakes, nearly lost a parent, and did something that still makes me shake my head.  I will tell you about that stuff, plus the year 2001, in 2 days.

Tomorrow is Bevboy's Blog post 2000.  It will be a special retrospective post that I have been working on for the last couple of weeks.  Look for it on Saturday!

Bevboy
Posted by Bevboy at 9:01 AM