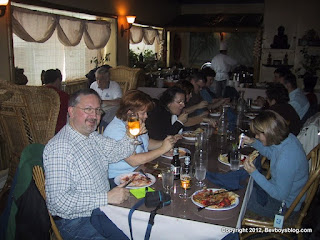 After the lunch, I was excused for the day.  I began to load up my car with my stuff and left mid-afternoon.  I remember having a nice weekend. 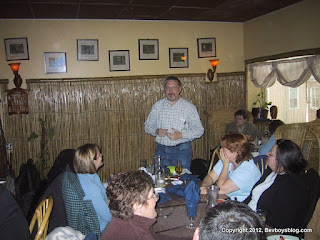 Monday morning, January 8th, I reported to my new job in the heart of the downtown.  My boss was out of town for the day so someone else led me around and introduced me to folks.  I was shown my new cubicle.  I had hoped that it would be no smaller a work space than what I had had before.  I was delighted to see that it was easily twice as big as my old space, and it was an open "pod" style that facilitated communication with colleagues.  A nice touch.  Jan pointed toward the overhead storage and told me my BlackBerry was up there.

Are you kidding me?

I had only held a BlackBerry once in my life.  All of a sudden, I had one to use all the time.  How would I cope?

Actually, the only problem with that model of BB was that it was designed for right handed people.  It didn't have a track pad on it; you pressed a button on the side of the thing to select the desired option.  It was awkward for me to use because I'm a leftie.

The months flew by.  I learned more in the first few months of my new job than I had learned in the entirety of my 9 years at the previous place.

We decided to check out the cottage over the Easter weekend.  We discovered that someone had driven a heavy vehicle on the lane, marring it for everyone else.  The lane is too mucky to be driven on until later in the Spring, but that didn't stop these other people.   This was the first full year of having problems with the hillbilly neighbours. 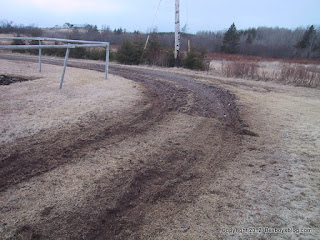 We eventually spent the summer at the cottage.  As you can see, my hair was getting pretty long then, too. 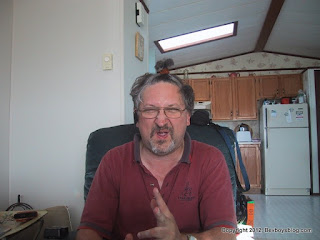 Newbie was about a year old at the time this picture was taken.  He still looks about the same. 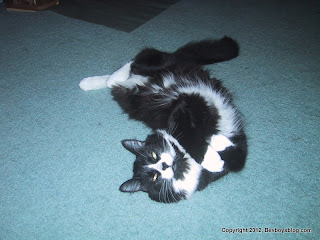 In September, my cousin  Bruce and his partner came to Halifax to visit Jamie's children, and invited Patricia and me over for dinner.  We went over, and we got a few snaps. 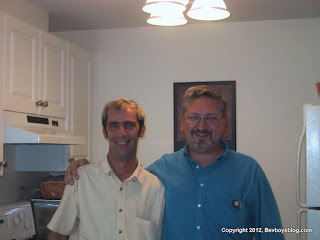 In the Fall, the same night that Marie Osmond fainted on "Dancing with the Stars", my father noticed that the neighbour's lights weren't on across the street.  Frankie was usually home.  He had lost his wife barely six months earlier.  Dad fetched another neighbour, and the two made their way to Frankie's.  They got inside somehow, and discovered him on the floor, dead.

Frankie had taught us kids to drive.  We visited him a great deal when we were growing up.  He was a veteran of World War II.  His uncle Lawrence Price was the last official British casualty of World War One.  Here's an article about him.   Frankie later received some documentation about his uncle, and those papers were found in the house after his passing.  The house went to his nephew because Frankie and his wife never had children.  The house was sold to my parents' neighbour, who flipped it; and now, someone else lives there. 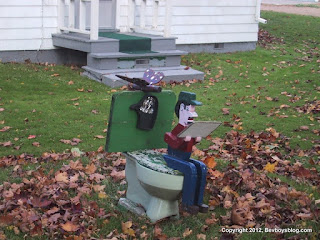 Frankie loved to fix lawn mowers and to make wooden figures with which he would decorate his property.  I have included a few examples.  I'm surprised that the Disney corporation never sent him a cease and desist letter.

No, I don't know what became of these figures.  Probably long gone by now.  I did manage to keep a Stanley Laurel wall clock, though.  I really should take it in somewhere to get the workings fixed.  Stanley Laurel was one half of the Laurel and Hardy comedy team.  I don't know anything about their interest in L&H, but I had long liked the clock and was allowed to take it after Frankie's passing.  I also was given a couple of old saw horses, which remain in my mother's garage. 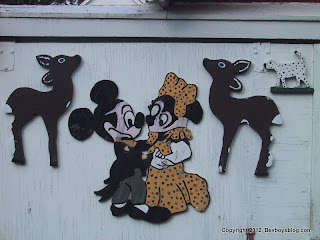 My digital camera was becoming more and more of a pain to use during 2007 and even more so in 2008.  The proprietary batteries were both reaching the end of their usefulness.  I could take perhaps 6 pictures before having to swap them out. Charging a battery would take a good 45 minutes, and then I could take another 6 pictures.  I took far fewer pictures in '07 than I did other years, and even fewer in '08.

The same month that Frankie died, I began this blog.  Less than 5 years later, you are reading post 2006. Love me.

2007 was a year of great change for me.  I had a challenging job again.  I said goodbye to a good neighbour.  I began this here blog.

In 2008, there would be more of the above, of course.  And, my first radio-related interview.  Come back here tomorrow and I will tell you all about that year.

Bevboy
Posted by Bevboy at 4:47 PM